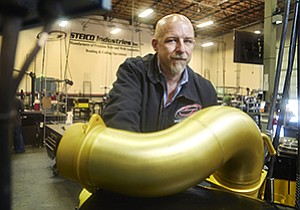 Troy Steiner, owner of Steico Industries Inc., is part of a resurgence in local manufacturing. Photo by Stephen Whalen.

It’s not easy being an aerospace manufacturer these days — or any manufacturer for that matter — if you call California home, but that doesn’t necessarily mean the grass is greener elsewhere.

Just ask Troy Steiner, owner of Steico Industries Inc., a company that’s been churning out precision tubes and ducts used in aircraft since 2001.

Steiner is among several smaller manufacturers that have been solicited by other states to move there, offering such incentives as tax breaks, land and low-interest loans — all in places that have a much lower cost of living. He acknowledges that he could double his profits if Steico was in Texas, a state whose governor has been aggressively calling for California businesses to move there.

“When you talk about tax advantages of operating a manufacturing business in California compared to other states, there is no advantage,” Steiner said.

And yet, Steiner chooses to remain here and try to grow his businesses. States who reached out to Steico in recent years include Texas, Arkansas, Arizona, New York and Virginia. He listened but ultimately decided that moving would be too disruptive, given that the business is qualified at its current facility and has its employees here, along with a network of supplier companies that would be difficult to replicate.

“To uproot this company is nearly impossible,” he said.

Meanwhile, Steiner’s business has been flourishing in recent years, propelled by new orders from customers that include some of the biggest aircraft makers in the world, such as Boeing Co. (NYSE: BA), Lockheed-Martin Corp. (NYSE: LMT), Northrop Grumman Corp. (NYSE: NOC) and Honeywell International Inc. (NYSE: HON). Last year, Steico did $32 million in sales. This year, Steiner expects about $34 million in revenue; the business will continue increasing annual sales by 10 to 15 percent over the next five years, he said.

Not only does Steico compete with manufacturers in this country, it’s going up against companies throughout the world. To win contracts, his business has to make its products “faster, of better quality, and on time — all the time,” he said.

Long ago, Steiner saw the importance of incorporating lean manufacturing techniques into his operations, and combined with a two-tiered management system that puts a premium on line workers making decisions, the business has gained traction while many other aerospace manufacturers have failed or lost contracts, he said.

MachineTek is another North County aerospace manufacturer that has been enjoying some recent success despite the headwinds that come with doing business here.

Spurred by an increasing use of honeycomb composites in many aircraft, the business is taking off, owner Kevin Darroch said.

“There aren’t many companies that do this type of product,” Darroch said. “There are only about five, and all the others are much bigger than we are.”

MachineTek should break $2 million in revenue this year, or about $500,000 more than it did last year, Darroch said. If he’s able to secure a contract from a major customer, he’ll hire an additional five to seven people in the manufacturing department, plus a few support staff to bring his total work force to 25.

While he’s been solicited to move the business to Nevada and Mexico, Darroch said he’s staying here because so much of the aerospace industry is here.

“In our line of work, it makes sense to have our facility here just because we need to be close to our customers,” he said.

While these two North County success stories deserve attention, both the state and county have a great deal of catching up to do before manufacturing regains the levels of employment it had in the late 1990s and early 2000s.

Michele Nash-Hoff, who has authored a book on the importance of manufacturing and works as a sales representative to a dozen manufacturers, said the state only added about 7,900 manufacturing jobs since 2010, a number that has hardly dented the enormous loss of some 625,000 jobs in the state since 2001.

The impact of manufacturing can’t be overstated, Nash-Hoff said, citing a statistic that shows that each job in manufacturing supports 2.5 jobs in other sectors. So, in a way, the manufacturing sector supports about a third of all jobs in the county, she said.

Wages earned by those in manufacturing are well above the region’s median wage, Nash-Hoff said. For example, nonunion machinists can make $18 to $24 an hour, while union members earn $35 to $40 hourly, she said.

Although San Diego suffered major job losses in manufacturing starting in an earlier recession in the 1990s, it’s seen a rise in higher-value manufacturing in recent years. The total value of San Diego’s production increased 21 percent from 2007 to 2012 to $51 billion, even as employment in manufacturing decreased 8.9 percent to 90,000 jobs during the same period, according to a report earlier this year from the National University System Institute for Policy Research.

Aerospace manufacturers like Steico Industries and MachineTek are helping to boost those numbers. In 2007, Steico had only 71 employees and about $21 million in sales. Today, the company has about 200 employees. And if sales proceed as anticipated, it should add another 30 employees, Steiner said.

Asked what was behind the company’s growth, Steiner cited having customers in all three segments of aerospace — commercial, military and general aviation — as well as a focus on quality production and top-level service to its customers.

“We have to do more with less,” he said. “We have to continue to be creative and forward-thinking on all our manufacturing processes.”