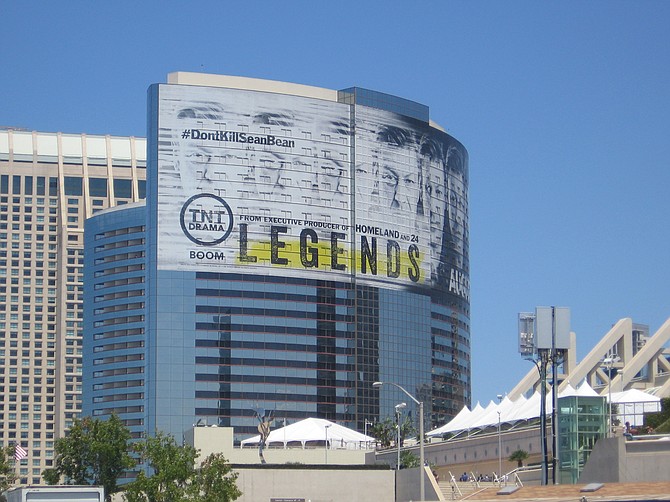 With the 45th annual Comic-Con International now underway, the area around San Diego Convention Center has again assumed its role as a global Billboard Central for the major film studios, TV networks and video-game makers touting their wares this year.

The 130,000 participants and global media attending the event, running through July 27, won’t be able to escape promotional hype by simply stepping out of the convention center. Next-door, an entire exterior wall of the San Diego Marriott Marquis & Marina hotel carried a multistory poster for the TNT series "Legends."

Across the street at the Gaslamp Quarter, the popular Tin Fish restaurant was open for business, but its exterior had been completely transformed into a screen-filled promotional venue for NBC shows like "The Blacklist" and "Constantine."

In addition to hosting several scheduled Comic-Con-related events inside, including an interactive flying-drone show presented by the TV show "24: Live Another Day," the exterior of Petco Park was its own mini-mecca of unavoidable and towering ads, for the History Channel’s upcoming "Vikings" miniseries and the ABC shows "Once Upon a Time" and "Resurrection."

On the lawn behind the convention center, Warner Bros. Home Video had a giant but silent Godzilla replica raining marketing terror on passersby; Batman fans rode a zip-line stretched across a dark skyline display for the Fox TV show "Gotham"; and marketers of "The Simpsons" were setting up an interactive “Homer Simpson’s Dome” display, with its own mini Kwik-E-Mart store.

Many of the buses running between Comic-Con and local hotels – part of a 24-hour shuttle service organized by Comic-Con and the convention center -- were fully festooned with ads for upcoming TV shows and movie blockbuster hopefuls. Even the San Diego Trolley carried at least one multicar exterior ad in the early hours of Comic-Con, for the "Gotham" TV show.