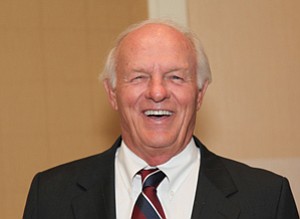 It will house the Cause Leadership for nonprofit leaders, which provides certificates and advanced degrees in nonprofit management. The new center will also offer Sanford Education programs, which are already in effect at Arizona State University, integrating Teach for America principles into the curriculum.

Sanford, a South Dakota billionaire who founded First Premier Bank and United National Corp., has donated more than $1 billion to help form different health, education and research institutes around the country. He has focused a significant amount of his contributions in the San Diego area.

In November, he pledged $100 million to University of California, San Diego to establish a clinical stem cell center at the school and hospital. In 2007, he donated $20 million to what is now called the Sanford-Burnham Medical Research Institute in La Jolla. Sanford also donated $30 million in 2008 for the development and construction of the Sanford Consortium of Regenerative Medicine, which opened in 2011.