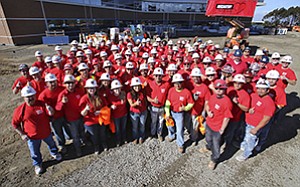 McCarthy Building Companies Inc. employees and subcontractors wore red on the first Friday in February in support of the American Heart Association’s National Wear Red Day. The campaign is designed to focus attention on the number one killer of women: heart disease. McCarthy has been a strong supporter of the Association’s efforts since 2004.

The Jewish Community Foundation selected three teens to receive the Peter Chortek Leadership Award for their extraordinary service, philanthropy and leadership. The recipients, Jacob Gardenswartz, Ari Krasner and Jenna Lizerbram, each received $3,600 and an additional $1,800 in a donor-advised fund at the Foundation to promote ongoing philanthropy. The award is supported by the Peter Chortek Youth Philanthropy Leadership Fund at the Foundation, established by the late Peter Chortek and his wife, Elaine, to foster Jewish communal involvement by recognizing Jewish high school students who practice the value of “Tikkun Olam,” or repairing the world.

The San Diego Business Journal has a special connection to Jacob Gardenswartz, a senior at Francis Parker School, who won for his “Theater of Peace,” which is a performance of short skits to educate students about bullying. The Business Journal’s intern, Madeline Ottilie, who is also a student at Francis Parker told us that she works with Gardenswartz at “The Scribe,” the school’s newsletter, where he is the managing editor.

“I was just a kid sitting in an assembly listening to a lecture on bullying, and I remember being so bored, wondering when lunch was going to be and decided there has to be a better way to get this important message across,” Gardenswartz said in a YouTube video about his award.

He got the idea to get together with other actors and to show students real-life examples of bullying rather than being told about it.

The Theater of Peace has performed more than 200 assemblies, reached more than 2,000 students across San Diego and raised thousands of dollars to spread the message about bullying. To see the YouTube video go to j.mp/jacobpeace.

The other two recipients were also impressive.