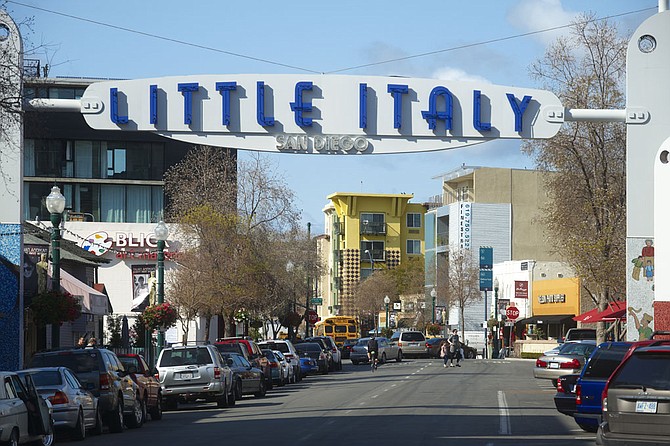 Downtown San Diego’s Little Italy has been in a revival mode for about two decades. Photo by Photo courtesy of Civic San Diego

Developers and business leaders in Little Italy are looking to break ground by midyear on Date Street Piazza, a vehicle-free public plaza that would be the latest of several projects bringing new residents and businesses to the historic downtown neighborhood.

Observers note that the neighborhood has been in a revival mode for the past 20 years, following a period of decline. Many of the past decade’s changes have bolstered the district’s status as a residential neighborhood, taking it beyond a popular tourist attraction as new apartments, condos and locally focused businesses have arrived on the scene.

“It’s really much more of a mix than it was just a few years ago,” said Marco Li Mandri, chief executive administrator of the nonprofit Little Italy Association of San Diego, which represents businesses in the neighborhood.

Observers noted that Little Italy has about 3,000 new apartments and condos added over the past decade, and more are in the works in the northwestern downtown neighborhood bounded by Laurel Street, A Street, Pacific Highway and Front Street.

Among the largest recently completed projects is Alliance Residential Co.’s Broadstone Little Italy, which includes 199 apartments. According to city data, there are at least nine other projects in various stages of planning and development that would add more than 600 apartments and condos to the neighborhood at full buildout.

Those projects range in size from four to 224 residential units. Most consist of 50 or fewer units combined with ground-floor retail to serve the local neighborhood.

The Little Italy Association is working with the city and San Diego developer H.G. Fenton Co., which has its own proposed mixed-use project at India and Date Streets, on final plans for the pedestrian-friendly Date Street Piazza.

Modeled on the grand plazas of Rome and other prominent Italian cities, the project calls for removing vehicle traffic from the portion of Date Street that runs between India and Columbia Streets. Amenities will include water features, lighting, landscaping and a movable events stage.

Li Mandri said the project is aimed at adding to the neighborhood’s sense of place, and establishing a permanent staging area for the steady stream of seasonal festivals and weekly farmers markets held in the vicinity.

The association and developers recently shared preliminary plans for the project with the downtown community planning board, Li Mandri said, and it is likely to go before Civic San Diego in February. The association and developers are aiming to break ground by June and have the project completed in about 18 months — in time for a Christmas tree lighting ceremony at the new plaza in late 2015.

The new resident-focused elements have brought with them a slew of new stores, restaurants and bars, whose operators are looking to give locals a convenient, quieter alternative to downtown’s visitor-focused hubs, like the Gaslamp Quarter.

“There’s been this shift from what used to be mostly thought of as a tourist area, and you have more of a feel of an actual residential neighborhood here,” said Arsalun Tafazoli, co-founder and owner of San Diego-based CH Projects, which has restaurants throughout the city and has opened Craft & Commerce and Underbelly in Little Italy during the past three years.

In February, Tafazoli and Executive Chef Jason McLeod plan to open Ironside Fish & Oyster at 1654 India St. Tafazoli said operators invested in a significant renovation of a 1920s-era former warehouse building that was once home to wrought-iron gate manufacturer Ironside for several decades.

Tafazoli said the goal was to have an eatery that reflects the neighborhood’s distinctive character and its ties to the city’s past. The new 4,500-square-foot restaurant will employ about 80, bringing CH Projects’ citywide total to about 300 workers.

Observers note that Little Italy, over the past three years in particular, has been broadening its offerings beyond the popular Italian restaurants that line its main India Street thoroughfare. New stores, bars and restaurants have arrived on the neighborhood’s northern and western edges, with more on the way.

The neighborhood is poised to see further retail and restaurant demand from downtown’s growing residential base, adding to its steady influx of visitors and daytime workers coming from nearby office buildings.

The San Diego County recently began work on a 10-level parking garage at Cedar Street and Kettner Boulevard — part of a larger waterfront park project near the downtown County Administration Center. Officials said government workers will use the 645 parking spaces during the day, with paid public parking to be made available to visitors on nights and weekends.