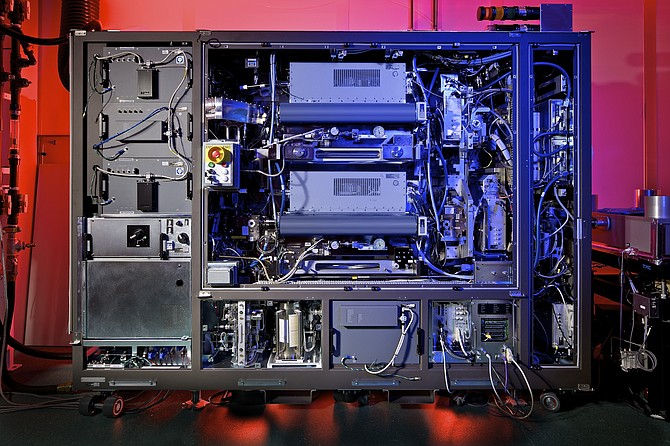 Cymer unveiled the new machine, called the XLR 700ix, on Dec. 1. The product is an argon fluoride immersion light source and is the third generation of such technology. It can produce microchips with tiny, 14 nanometer geometries, which is state of the art as microchip dimensions continue to shrink.

The company also said that its new machine is more environmentally friendly than previous offerings. Power consumption for the XLR 700ix is down 15 percent. Helium consumption is down by half.

Helium is “a critical purge gas due to its unique thermal properties to ensure stable optical performance,” according to Cymer. The Cymer machine uses the gas in its line narrowing module.

Cymer has also upgraded software for its new machine, which it will start shipping in the first quarter of 2015. Potential customers include semiconductor equipment makers ASML and Nikon.

The XLR 700ix is a deep ultraviolet laser. Cymer is also working on an extreme ultraviolet product.

Cymer is a homegrown San Diego company and was publicly traded until recently. Netherlands-based ASML paid $3.7 billion for Cymer, closing its purchase in May 2013.