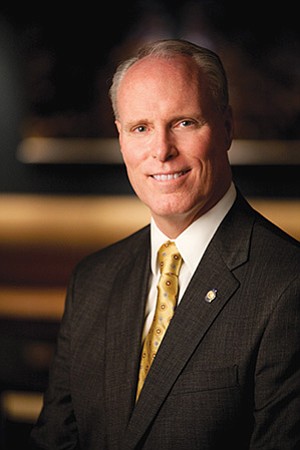 Chris Van Gorder has earned a reputation in San Diego as an influential leader in health care management, frequently receiving national attention for contributions to the profession. Now the Scripps Health CEO has permanently added his name in the history books of leadership and management by putting his name on the shelf with them.

Van Gorder has written a book on leadership and management called “The Front-Line Leader: Building a High-

Performance Organization from the Ground Up.” It’s being published by Jossey-Bass, a John Wiley & Sons Inc. brand, and is set for release in November.

Van Gorder had thought of writing a book for years, but he was wary of others’ suggestions that he write his life story.

“I didn’t think anybody would want to buy my biography,” he said. “It’s not like I’m Colin Powell or anything.”

But at the same time he believed that recounting his memories of him and his team turning around Scripps from near bankruptcy several years ago could be meaningful to other leaders.

“I thought I could tie some of my personal story with management lessons I’ve learned,” he said.

And “The Front-Line Leader” goes beyond Scripps’ turnaround. The book traces back to Van Gorder’s years as a California police officer as it outlines his leadership techniques grounded in the principles of responsibility, honesty and a duty to public service that he attributes to his upbringing.

“My parents emigrated from Scotland and Canada, and they taught me and my twin from a very young age that we had an obligation to give back to a country that had been good to us.” he said.

Van Gorder will donate all proceeds from the book to Scripps and its charity work.

“My intent was not to make money,” he said. “My intent was to tell the story of the Scripps turnaround and how I went from being a street cop to a CEO in a health care organization.”

Van Gorder’s rise to health care executive has been unconventional, to say the least. As a young police officer, he responded to a family dispute in which his squad car was deliberately hit by an oncoming vehicle driven by a distressed woman. Van Gorder spent the next year at Los Angeles Orthopaedic Hospital recovering from serious nerve damage to his back and neck — injuries that forced his retirement from law enforcement.

His time spent at the hospital inspired a new interest: health care management. After serving as head of security for the Los Angeles Orthopaedic Hospital, Van Gorder pursued a graduate degree in health care administration and subsequently worked in a series of hospital management positions before landing at Scripps Health in 1999.

At Scripps, Van Gorder oversees all functions of the integrated health system, including its five hospital campuses, dozens of outpatient centers throughout San Diego County and a regional home health service and hospice.

When Van Gorder arrived at Scripps, it was losing $15 million a year with total operating revenue at $800 million for fiscal 1999. He responded with a transparent co-management style as he set in place a strong executive team and streamlined business operations focusing on internal efficiencies, physician relations and workplace culture.

His strategies spurred a landmark turnaround. Total operating revenue in 2013 was $2.6 billion, a 225 percent increase since Van Gorder assumed leadership. Employment increased from 7,900 workers in 1999 to 13,782 today. His “no layoffs” policy has led to a more loyal staff with the turnover rate decreasing from nearly 20 percent in 1999 to a current rate of 9 percent.

Since Van Gorder’s leadership has taken root, Scripps has been featured in Fortune magazines “100 Best Hospitals to Work For” list for seven consecutive years. In 2013, the hospital was named by Becker’s Hospital Review as one of the 100 Greatest Places to Work in Healthcare, and AARP recently named Scripps as the second-best employer in the nation for workers 50 and older.

Van Gorder has no intention of retiring early. Instead, he has set Scripps on a path for regional growth and expansion — more than doubling its outpatient neighborhood locations and expanding nearly all its hospital campuses. The organization’s $2 billion growth and expansion plan for the San Diego region includes two new critical care centers, a cardiovascular institute and a new radiation therapy center that opened in 2012. The Scripps Proton Therapy Center opened earlier this year, one of 15 in the United States.

Never completely turning away from law enforcement, Van Gorder continues to serve the public today as a reserve assistant sheriff in the San Diego County Sheriff’s Department, in charge of the Law Enforcement and Search and Rescue Reserves.

In 2006, Van Gorder’s volunteer work was honored with the Maltese Cross Award from the San Diego County Fire Chiefs, and again in 2007 with the MedAssets Outstanding Humanitarian Award. In 2007, he also received the University of California’s Guardian Award for his achievements in health care and commitment to the community. This year, Van Gorder was recognized by the American College of Healthcare Executives with its top honor — the Gold Medal Award.