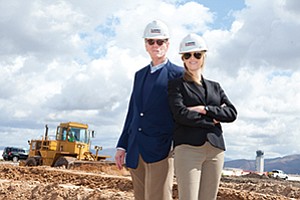 Businesses like locally based developer Murphy Development Co. are lauding a recent move by the city of San Diego to clarify the future of what gets built in Otay Mesa after nearly 13 years of debate over the neighborhood’s future.

San Diego planners and the City Council have approved for the border-adjacent region an updated community plan that a city staff report says is intended to define “new strategies for the way Otay Mesa would develop and function” over the next 20 to 50 years. Otay Mesa — bounded roughly by San Ysidro to the west, the city of Chula Vista and Otay Valley Regional Park to the north, unincorporated San Diego County on the east and the U.S.-Mexico border and city of Tijuana to the south — is by far the city’s largest community, spanning 9,300 acres.

“What we needed for a long time was something like a paint-by-numbers plan,” said Murphy Development President R. Michael Murphy, whose company is among the region’s largest industrial park developers. “Now that we have some numbers, people can start to figure out where to fill in the painting.”

City planners said priorities of the revised blueprint include enhancing Otay Mesa’s “unique role as a binational regional center,” supporting international trade and diversifying the neighborhood’s economic profile to boost growth and employment. Residential goals include providing more and varied housing to meet workforce needs and putting that housing close to employment centers while creating balanced neighborhoods that integrate mixed-use, sustainable principles now being carried out elsewhere in the city.

The revised Otay plan creates two village areas — the Southwest and Central villages — where the city will encourage development of transit-oriented, high-density projects with residential and commercial elements that promote walkability. Meanwhile, the plan involved tweaking land uses so that industrial takes up slightly less of the overall pie — going from 31 percent to 27 percent of available land. Open space now accounts for the largest portion, going from 28 percent to 30 percent.

The city has also established a funding mechanism to support long-range infrastructural improvements planned for Otay, including $930 million in transportation projects, $200 million in park facilities and $36 million in police and fire facilities.

Instead of basing fees charged to developers on the gross acreage of their projects, such fees will be determined through a city formula that gauges the expected vehicle trips to be generated by a project.

Observers said the Otay blueprint should help establish some certainty, following years of uncertainty over what would ultimately be allowed in the neighborhood and how the required support systems would get financed and built.

“We now have a much better sense of who will be paying for infrastructure and these other types of things,” said Kaitlin Murphy, senior vice president at San Diego-based Murphy Development.

The company will soon begin grading work on Brown Field Technology Park, a long-planned industrial development off state Route 905 at Brittania Boulevard — the company’s fourth big Otay project since 1986. The new industrial park, located directly west of Murphy’s existing Brown Field Business Park and near the municipal airport, will be a combination of build-to-suit and speculative development, to take place over the next several months. Murphy officials are in talks with several prospective tenants for the 50-acre site.

Like other developers, Murphy is looking to see some consistent upward movement in what has been a pattern of up-and-down business activity in recent years. Murphy’s parks, for instance, have become home to growing industries like food processing.

The neighborhood is also home to companies like Innovative Cold Storage Enterprises Inc., which recently has been seeing increasing demand for cold-storage and distribution-related services among food producers and other types of industries locating in Otay, General Manager Matt Jones said.

Vacancy Could Rise Before it Falls

Despite that kind of progress, the Otay market has a stubborn overhang of existing industrial space that remains empty, said Linda Greenberg, principal in the San Diego office of real estate services provider Lee & Associates. It may take time to determine the Otay blueprint’s ultimate influence on the region’s industrial prospects.

“It’s not going to have a lot of direct impact right now related to what gets developed,” said Greenberg, who handles primarily industrial transactions.

Demand for new industrial space might not emerge until the region gets its vacancy rate at existing buildings — currently 14.4 percent — down to lower levels. Some of Otay’s 2.1 million square feet of vacant space is in older buildings that are challenging to retrofit for today’s industrial requirements. And there is still a tendency among many industrial tenants to favor locations further north to more directly serve customers in neighboring counties and to be closer to where their employees currently live.

Greenberg noted that the last speculative development in Otay was the six-building, 663,000-square-foot Ocean View Hills Corporate Center, built in 2007.

In the near term, industrial vacancy in Otay could could actually rise or stand still before it goes down. The neighborhood, for instance, will see 600,000 square feet emptied by June 2015. Factory 2 U, an off-price clothing and household goods retailer, recently decided to vacate its large distribution space off Piper Ranch Road in the Sunroad Corporate Center, as the Gardena-based company consolidates operations in the Los Angeles market.

Area Hopes to Take Off with Airport

Business optimism, nevertheless, is being fueled by plans for new commercial development planned at the border-adjacent Brown Field Municipal Airport, as well as regional transportation upgrades that have been completed, are underway or are in the pipeline.

The city last fall approved plans by Brown Field International Business LLC, which is looking to develop nearly $1 billion in new amenities in coming years on a 331-acre portion of the airport property. Called Metropolitan Air Park, the project includes new hangars, an executive jet aviation support facility, two business hotels, and related retail and restaurants, to be built in several phases over the next 20 years.

The project has since encountered a legal challenge from a coalition of environmental groups seeking to block development on the grounds that it would destroy sensitive wetland and burrowing owl habitat around Brown Field.

Richard Sax, president and CEO of Brown Field International, said his company is optimistic about working through the challenges in order to proceed with the Browns Field project soon. Sax, who has developed similar aviation-oriented amenities at places like the county-run McClellan-Palomar Airport in Carlsbad, said the newly approved Otay plan marks a significant milestone for that region.

“It’s going to provide some predictability for developers and investors,” Sax said. “We’re very happy that this plan for Otay has been approved, in terms of the potential for growth in that area.”

The city and developers have projected that the Brown Field work will create 4,000 new permanent jobs and 8,000 temporary jobs related to construction over the next seven to 10 years.

Also in Otay, the state has begun work on Route 11, a four-lane freeway expected to connect a planned new border crossing at Otay Mesa — a toll-based crossing known informally as “Otay 2” — with state Routes 905 and 125.

Later this year, private developers in the U.S. and Mexico are looking to begin construction on a $78 million cross-border commercial air passenger terminal — expected to be completed in 12 to 18 months — that will give ticketed travelers on the Otay side direct pedestrian access to the Tijuana airport.