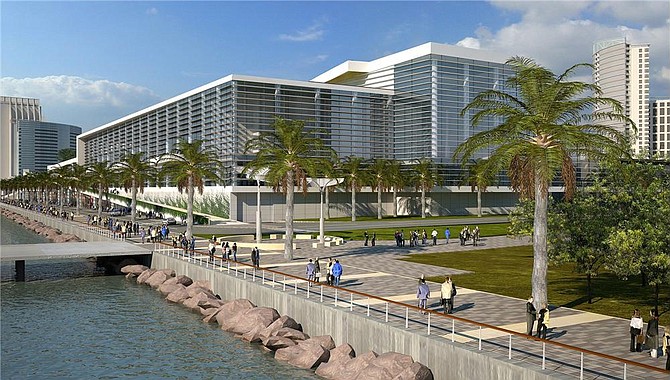 The California Coastal Commission on Oct. 10 is scheduled to review the latest plans for the proposed $520 million expansion of the San Diego Convention Center.

Port of San Diego officials and other backers of the proposed $520 million convention center expansion are likely to stage a miniconvention of their own on Oct. 10, when the California Coastal Commission discusses the latest version of the project.

Those center supporters now face the daunting challenge of garnering the commission’s blessing for an amendment to the port district’s master plan for the waterfront — needed for the expansion to proceed — after Coastal Commission staff recently recommended that the panel reject the changes.

Port district officials immediately reiterated their support for the project after the staff recommendation was made public, saying they would be making their case to the coastal commission’s 11 voting members. The port district said its project team remains involved in ongoing negotiations with commission staff.

The commission’s has final say on waterfront projects, and has scheduled its next three-day series of public meetings for Oct. 9-11 at the Crowne Plaza Hotel in Mission Valley.

The staff report said the project will result in “significant impacts” to views, visual quality and coastal recreation “through the substantial loss of already limited waterfront area and open space,” among other issues.

Staffers said the 100-foot-high, 1,000-foot-long convention center building — just 35 feet from the existing public promenade and 70 feet from the water’s edge — “will contribute to the sense that the shoreline is part of the convention center” and eliminate an existing 1.6-acre landscaped open space and public area adjacent to Harbor Drive.

The report added that construction of a building this size, that close to the waterfront, “would be unprecedented in San Diego County.”

If the Coastal Commission follows its staff’s advice, the long-discussed convention center plan likely will be sent back to port and city officials for revisions. At stake is an expansion that would add 740,000 square feet of new indoor and outdoor spaces to the convention center, including a planned 5-acre rooftop park.

In addition, the next-door Hilton San Diego Bayfront hotel is planning a $200 million expansion, which would add 500 rooms, contingent on the convention center project moving forward.

The convention center sits on port-

controlled land. It was originally built by the port district and is operated by the city of San Diego, through the nonprofit San Diego Convention Center Corp.

Led by longtime restaurateur and interior designer Tracy Borkum, the company recently opened Cucina Enoteca at the Flower Hill Promenade retail center in Del Mar. The two-story, 7,000-square-foot restaurant, which was under construction for much of the past year, occupies the site that once housed a Chevy’s restaurant.

The restaurant has its own wine shop, where customers can buy wines at retail price to take out or drink with their meals. It describes its menu concept as “modern Italian kitchen meets rustic farmhouse,” overseen by Executive Chef Joe Magnanelli.

It is the latest addition to the 35-year-old retail center, which is operated by locally based Protea Properties LLC. Earlier this year, the center completed a $30 million renovation, which included the addition of a new Whole Foods Market, Burger Lounge and several other stores and eateries.

Urban Kitchen said this also marks the continuation of a significant expansion for the company, which operates the flagship Cucina Urbana in Banker’s Hill and Fish Public in Kensington, in addition to Urban Kitchen Catering.

Its first Cucina Enoteca opened at the Irvine Spectrum Center in Orange County in 2011, and Borkum recently announced that another is set to open at the Fashion Island mall in Newport Beach in summer 2014.

Restaurant, Apartments Replace Gas Station: Promiscuous Fork Inc., a restaurant and catering company, will be the retail occupant of The Point@Ingraham, a new mixed-use apartment project being built by Veritas Urban Development in Pacific Beach. The project, which includes 21 apartment units, is expected to be completed by year’s end on the site of a former Union 76 gas station at the corner of Ingraham Street and La Playa Avenue.

Promiscuous Fork, led by owner Ray Penfield, signed a $639,237, seven-year lease for the 2,268-square-foot, ground-floor retail space, according to brokerage services company Cassidy Turley, which represented the restaurant firm and the landlord. Locally based Veritas is run by brothers Russell and Scott Murfey.