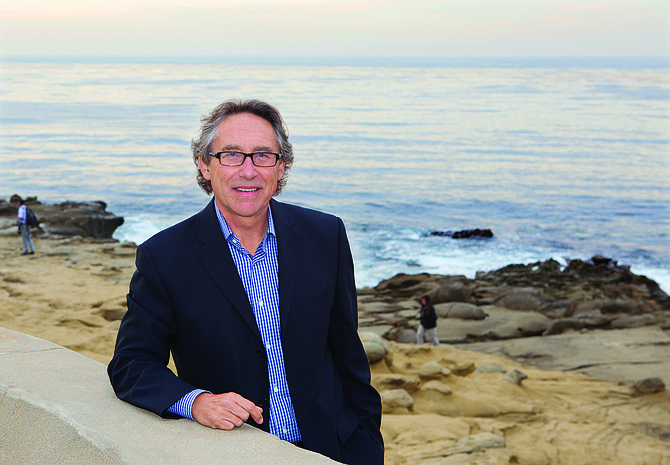 Alan Lewis, CEO of MediStem Inc., is leading his second company that is working to develop stem-cell based therapies. Photo by Melissa Jacobs.

San Diego is a beacon nationally for its advances in regenerative medicine and stem cell research, but the field has faltered in its transition from the bench to the bedside.

Regenerative medicine holds remarkable potential, but to date few stem cell-based therapies have been reviewed for safety and efficacy in clinical trials. Only a handful received regulatory approval.

San Diego’s profile in the regenerative medicine space has been raised recently thanks to billionaire businessman and philanthropist T. Denny Sanford’s $100 million to University of California, San Diego to establish a clinical center for stem cell therapy.

Stem cell companies are enthused that such a donation could buoy investor interest in the space, which has lagged in recent years. The private sector remains small and largely struggling for funding, whereas academicians are at least receiving a lion’s share of support from federal agencies and private donations.

Despite the field’s relatively slow advances, many patients with otherwise incurable diseases are actively seeking options in the form of stem cell therapy. This has led to controversy in the regenerative medicine space — chicanery runs rampant among many stem cell clinics locally and abroad — but there aren’t any effective measures in place yet to regulate potential false scientific claims.

There are more than 50 U.S. regenerative medicine companies trading on the public markets, but the majority have market capitalizations less than $20 million. About a half dozen are in San Diego, including the MediStem Inc., International Stem Cell Corp. and Cytori Therapeutics Inc.

MediStem is CEO Alan Lewis’ second regenerative medicine company. He was previously CEO of La Jolla-based Viacyte Inc., which is using stem cells to find a treatment for juvenile diabetes, before he left in 2008 to become the president and CEO of the Juvenile Diabetes Research Foundation — a nonprofit that raises more than $200 million per year.

Lewis returned to stem cell technology, lured by the exciting science of the field — and so joined Medistem (OTC: MEDS) last year as CEO. The early-stage company uses stem cells derived from menstrual blood to seek therapies for diseases like congestive heart failure, neurodegenerative diseases and diabetes. At Viacyte, he used embryonic stem cells — a controversial aspect of regenerative medicine that many companies have started to sidestep.

“When I joined the [Juvenile Diabetes Research Foundation], I was told not to tell people in the Midwest I worked with embryonic stem cells because people were probably a bit more opposed to that,” Lewis said.

Funding for regenerative medicine is trickier for companies than it is for academics, said Mark Saad, chief financial officer of Cytori Therapeutics.

“There’s been limited investment from typical private and public portfolio managers,” Saad said. “The typical venture community has mostly played hands-off because of the inherent early-stage nature of the field.”

In 2004, Californians voted on a proposition that provided $3 billion over 10 years to create the San Francisco-based California Institute for Regenerative Medicine, which has been doling out hundreds of multimillion-dollar grants to researchers and some businesses — including Viacyte — to hasten the development of stem cell therapies.

But in its last year, the institute is running out of funds. And despite the early enthusiasm surrounding the promise of regenerative medicine, it’s lagged in recent years, Saad said, in part because none of the CIRM-funded companies have produced any therapies approved by federal regulators.

“If you really, critically look at the different technologies — where they are from a clinical point of view and how close they are to the market — you realize there’s still a long way to go,” Saad said. “That’s resulted in about five or six years of headwind, which has been a struggle for companies with expensive development needs and that are still years away from any real breakthroughs.”

Despite a “hangover” following the initial rush of regenerative medicine excitement, Saad said the tide has been turning — and some stem cell companies will make it through the storm. Others will not.

Cytori has thus far been one of the promising ones — it recently signed a deal with Chinese regenerative medicine company Lorem Vascular that could be worth as much as $531 million. Cytori (Nasdaq: CYTX) has technology that can reconfigure patients’ fat cells, which have been found to have regenerative properties, and use them to develop breast reconstructive tissue and treatments for heart disease.

Despite the hurdles in developing safe and effective stem cell therapies, some patients are desperate for any sort of treatment and are willing to try anything, said Simon Craw, executive vice president of business development and investor relations for Carlsbad-based International Stem Cell Corp.

Craw said he receives calls and emails daily from patients looking to enroll in clinical trials for the company’s nascent Parkinson’s disease therapy. ISCC plans to file an application with the Food and Drug Administration next year to begin clinical trials in humans, but its stem cell work is still only being tested in primates.

Patients also often reach out to ISCC to ask for second opinions that validate other companies’ therapies. But more often than not, Craw has to inform such inquirers that companies’ claims that they can effectively treat Parkinson’s are likely unproven by science.

“A lot of the therapies people ask me about sound horrendously dangerous and totally fictitious in terms of efficacy,” Craw said.

Indeed, there are several companies the world over — even in the San Diego region — that dubiously claim they already have a “stem cell therapy” answer for a myriad of diseases. But these panaceas generally haven’t received any sort of regulatory oversight, nor have they been tested through the rigorous trials that are standard for medical treatment, said Rusty Gage, a genetics professor at the Salk Institute in La Jolla.

The breadth of this problem remains unchecked, Gage said. There’s no current way to evaluate how much snake oil is prevalent among stem cell companies. Currently, scientists and the general public alike have been relying only on anecdotal evidence of stem cell fraudulence, Gage said. Such treatments can run $100,000 or more, and have no proven efficacy. Media reports of horror stories from stem cell “therapies” gone wrong paint an ugly picture of the field and cast a pall on the good research that’s being conducted.

Ferreting Out the Bad Science

Gage, the former president of a Skokie, Ill.-based nonprofit called the International Society for Stem Cell Research, is organizing a series of meetings at the National Academy of Sciences to find a means and method to determine how much bad science really is in stem cell therapies. The first workshop is Nov. 18.

“We already know this is a big problem, so we’re bringing in experts from all over the world to really assess for the first time how big it actually is,” Gage said.

The consortium will kick off a large-scale data-collection project to define which therapies are valid and which aren’t, Gage said. It’ll arm researchers, investors and, most importantly, patients against the unethical use of unproven therapies.

In the interim, the gift from Sanford will help launch the $275 million Sanford Stem Cell Clinical Center at UC San Diego, which will help academicians and companies test their early-stage therapies in a hospital environment.

“We have incredible scientific and medical talent in La Jolla and San Diego, working together on a variety of different fronts on regenerative medicine,” said Larry Goldstein, director of UC San Diego’s stem cell program. “We hope to speed up the commencement of human clinical trials from work that’s emerging from our labs.”