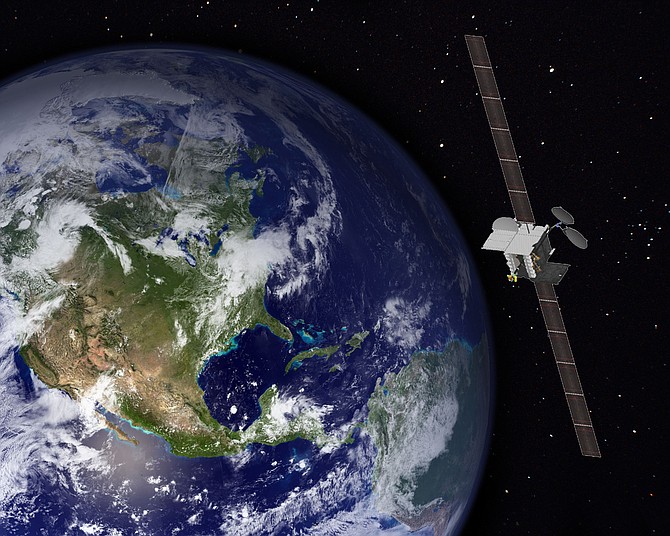 This is a rendering of the Boeing satellite that will carry ViaSat’s VS-2. ViaSat said that it and Boeing have inked a strategic agreement to jointly market and sell satellite systems based on ViaSat-2 technology.

ViaSat Inc. recently took the wraps off its plans to launch a second satellite to provide broadband service to North America and surrounding regions.

The Carlsbad-based company said it executed a contract with Boeing to build and launch the satellite in 2016.

ViaSat predicted that when it is up and running, ViaSat-2 will be the world’s highest capacity satellite.

Its predecessor, called ViaSat-1 and launched in October 2011, recently earned a spot in the Guinness Book of World Records for being the highest-capacity communications satellite in the world. The satellite powers ViaSat’s Exede Internet service in the United States and Canada. The company reported 295,000 subscriptions on the satellite.

CEO Mark Dankberg told analysts on a conference call that the company would fund ViaSat-2 using cash flow from operations as well as existing credit lines. The estimated cost of the project is $625 million — 25 percent higher than the cost of ViaSat-1.

ViaSat said its proposed satellite will double the bandwidth economics of ViaSat-1 and increase its coverage footprint sevenfold. Company officials are planning to serve virtually all of North America, Central America, a small portion of South America, the Gulf of Mexico and the Caribbean, as well as major flight and shipping routes.

“The thing that the new satellite really will do for us is the ocean coverage,” Dankberg told analysts during a recent conference call, giving the example of serving JetBlue flights from New York to Florida.

The satellite would be based on Boeing’s 702HP platform.

Tim Quillin, an analyst from Stephens Inc. of Little Rock, Ark., noted the satellite appears to have a “truly innovative design.”

“The satellite appears to have a unique approach to dynamically allocating capacity across a very large geographic footprint,” Quillin wrote. “As compared to previous broadband satellites with spot beams that cover relatively small geographic areas, so that capacity in a certain area can be exhausted long before the overall satellite is full, ViaSat-2 will dynamically allocate the satellite’s capacity to where it is needed.”

ViaSat also said that it and Boeing have inked a strategic agreement to jointly market and sell satellite systems based on ViaSat-2 technology.

Matthew Robison of San Francisco-based Wunderlich Securities Inc., raised his price target for ViaSat stock from $39 to $47, citing ViaSat’s progress on its Exede service. That number “is subject to future revision as we model the implications of ViaSat-2,” he wrote.

At the same time it announced its major new project, ViaSat announced financial results for the year.

The company reported a net loss of $41.2 million on revenue of $1.12 billion in its 2013 fiscal year, which ended March 29. The latter number was split between product revenue of $664 million and service revenue of $455 million.

During the conference call, Dankberg predicted “modest” decline in profits from ViaSat’s government business in fiscal 2014. Like other government contractors, ViaSat is facing the prospect of across-the-board federal budget cuts, or sequestration.