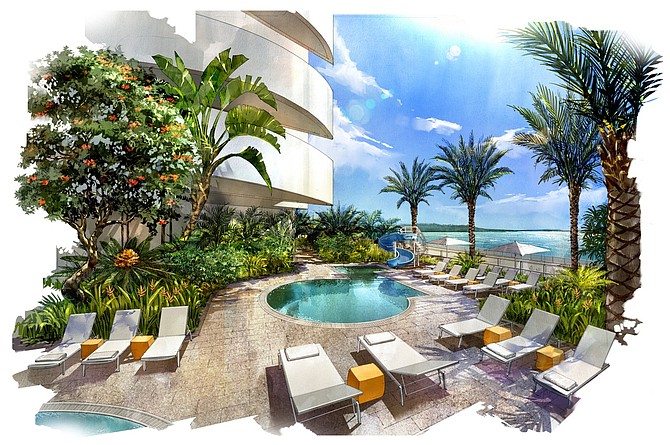 The Hilton San Diego Bayfront hotel recently completed an extensive renovation that included the addition of a poolside lounge called The Pool Club, the kid-friendly Splash Zone and a new Promenade Plaza for special events.

A hotel spokeswoman said operators are not disclosing the exact amount spent on the additions. But they include a new outdoor events plaza, a children’s pool and waterslide, and an open-air bar and lounge known as The Pool Club: A Siren’s Call.

The renovated pool area now has a heated, saltwater infinity pool with the visual effect of water extending to the horizon — and a mix of new lounge furniture. The kids-only Splash Zone has a shallow water-immersion station with fountains and water toys, and there is also “just their size” poolside seating, according to a hotel statement.

The events area, called “The Promenade Plaza,” is designed as an “outdoor ballroom” with the latest audio/visual media systems, lush landscaping and bay-front views. Operators said the 10,000-square-foot plaza can accommodate banquets for 400 people, theater-oriented events for 600, and receptions for 500.

The property’s fitness center, near the updated outdoor elements, has been expanded to include new-technology exercise and weightlifting equipment.

Construction Activity Lags in First Four Months: Thanks to sparse activity in the nonresidential category during the month of April, San Diego County’s construction pace fell behind that of the year-ago period based on construction contracts in the first four months of 2013.

According to the latest numbers from McGraw Hill Construction, the region had a total of just over $1.1 billion in contracts for future construction during the January-April period. That was down 23 percent from a year ago, when there were just over $1.4 billion in projects in the works.

Operators said the arch-style aluminum sculpture, resembling a trellis more than 10 feet high, is part of a renovated area where the restaurant will host weddings and other events. The project was commissioned through the Port of San Diego’s “1 percent for art” program, in which building operators can draw from a fund to support approved public art projects.

The measure was presented last year to council’s Land Use & Housing Committee by the San Diego Chapter of the California Restaurant Association, with legislation subsequently spearheaded by council member Lorie Zapf.

Zapf said in a statement that the new rules, creating a “sidewalk café” option, will aid local businesses that are important to the health of the local economy, but often unable to afford permit and related fees called for under prior laws, often totaling up to $12,000.

Under new regulations, processing fees will average approximately $1,200. The basic sidewalk café option will allow businesses to set up a single row of tables within 4 feet 6 inches of the building, while allowing a clear path of travel on the sidewalk.

The ordinance does not supersede local community plan regulations that may prohibit narrowing of walkable space in certain sidewalk areas, and restaurant owners must still abide by all rules under the California Department of Alcoholic Beverage Control regarding the serving of alcohol outdoors. The ordinance does not allow music to be played on a sidewalk café.