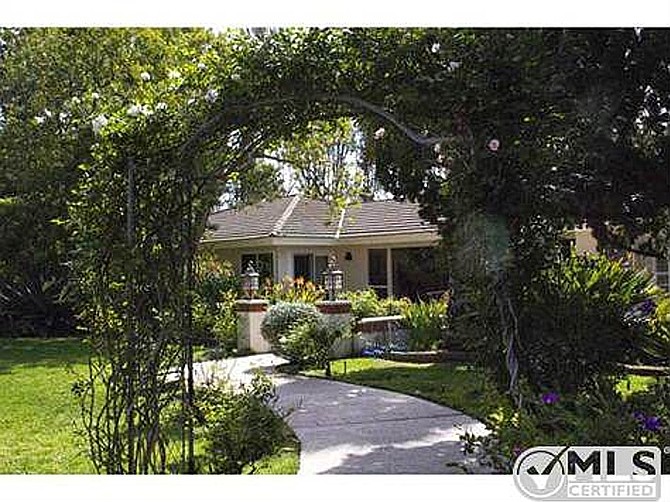 A buyer has made an offer on this 2.5-acre, 3,212–square-foot, four bedroom, four bath Rancho Santa Fe property listed at $1.65 million, contingent on selling a house in Carlsbad.

San Diego’s median home prices continued climbing last month with the increases in the luxury category, above $1 million, rising faster than the rest of the market, say housing industry sources.

Sales activity in such tony areas as La Jolla and Rancho Santa Fe were especially competitive. According to Redfin, the Seattle online real estate brokerage, housing sales in San Diego’s 92037 zip code, which includes La Jolla, reached 415 from January through March, making it the fourth most active luxury market in the nation.

Last week, Redfin agent Jordan Clarke, said he represented buyers in two separate closings, one in La Jolla for about $2.6 million and one in Rancho Santa Fe, for $1.65 million. The latter purchase was contingent on the buyer selling her residence in Carlsbad.

“The sale activity in both Rancho Santa Fe and La Jolla is white hot,” Clarke said. “I’m writing lots of offers on homes ranging from $1 million to $3 million for buyers who are usually encountering multiple offers, which often require making an offer over the listing price.”

Clarke’s buyer in the Muirlands part of La Jolla was competing with four other buyers on the renovated 3,000-square-foot, four bedroom house.

Darcie Webber, the buyer of the Rancho Santa Fe property on 2.5 acres, said she had been seeking a house in the exclusive North County enclave for months. She said a big reason for choosing the house was that “you can ride horses here.”

Webber is listing her Carlsbad, 3,300-square foot house for $1.08 million, slightly more than what she paid for the house seven years ago.

Redfin said the median housing price in Rancho Santa Fe as of April was $2.17 million, and for La Jolla, $1.46 million.

Rick Ungar, an agent for Casa Bella Realty Services in Carlsbad, said the increased sales occurring in North County are pushing up prices by double digits. In Carmel Valley so far this year, 88 properties above $1 million were sold, compared with 40 properties above that price for the like period of 2012.

The increase in luxury home sales was even more dramatic in Carlsbad, which showed 52 sales so far this year, compared with 18 during the same timeframe in 2012.

“My impression is that sellers now have more equity (in their current houses) and that gives them more flexibility,” Ungar said. “People are now able to sell their homes without putting money in, or putting in less money, leaving enough money for a down payment on their next home.”

Across the Southern California region, sales in all price categories were moving briskly this year except for properties below $200,000, according to Dataquick, the La Jolla real estate research firm. The report for April showed a 30 percent decline in the lowest priced category from April 2012.

The same report found sales of houses above $800,000 shot up 51 percent over the year. The number for houses above $500,000 increased 53 percent, at the highest level in the past five and half years.

The median home price in San Diego County in April increased to $400,000, up 21 percent from April 2012, and the highest it’s been since 2008 when median prices from the peak were in decline.

Recent data from the San Diego Association of Realtors showed much higher price appreciation over the same period. In April, the county’s median housing price hit $450,000, a level that it hadn’t been since January 2008, SDAR said.

Housing price appreciation was most apparent in the luxury category above $1 million in such areas as Coronado, Del Mar, La Jolla and Rancho Santa Fe.

In La Jolla, the median for a single family detached house was $1.48 million in April, up 5.6 percent from the same period in 2012. In Rancho Santa Fe, the increase in the median from last year was 13 percent, rising to $2.25 million.

But those prices were still below what the median prices were in 2008. For example, the median detached house in Rancho Santa Fe was $2.75 million five years ago, and in La Jolla it was about $1.8 million, according to the SDAR report.

Local housing sources said among the factors driving the increased activity is that financing seems to be getting a little easier to obtain, as lenders back away from what some said were overly conservative underwriting standards. Another big impetus is the still historically low interest rates that have dropped below 4 percent on a 30-year fixed rate mortgage, industry sources said.