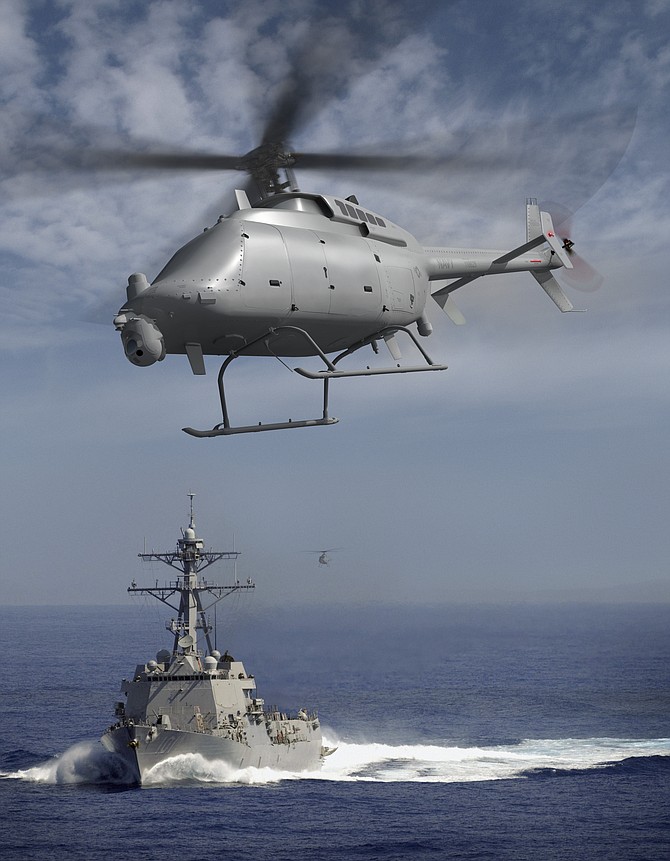 A photo illustration depicts a pair of Northrop Grumman’s MQ-8 Fire Scouts accompanying a U.S. Navy ship. The unmanned aircraft is engineered in San Diego and is scheduled to make its first flight this summer.

Northrop Grumman is giving the Magicians a new trick.

The organization, however, is different from previous aircraft squadrons. It will include both manned and uninhabited aircraft.

Northrop Grumman is bringing the unmanned aircraft to the squadron, specifically its Fire Scout helicopter. The Virginia-based corporation does much of the engineering on the Fire Scout in Rancho Bernardo, where it has its unmanned systems center of excellence.

The new Navy squadron will consist of 10 unmanned MQ-8B Fire Scouts as well as eight MH-60R Seahawks, which are manned helicopters.

The Navy plans to send the squadron to sea on board its littoral combat ships, a relatively new type of vessel capable of traveling in shallow, near-coastal waters.

The first deployment will be in spring 2014 on the USS Fort Worth, said Lt. Aaron Kakiel, a spokesman for the commander, Naval Air Force, U.S. Pacific Fleet.

The Fire Scouts operate within a 110-mile radius of their ships to send back intelligence, surveillance and reconnaissance. Sensors include electro-optical and forward looking infrared varieties.

Some Fire Scouts have also operated in landlocked Afghanistan.

The original model is based on a Schweitzer Aircraft Corp. model now made by Sikorsky Aircraft Corp. Called the MQ-8B, it weighs about a ton without any fuel in the tank.

The larger Fire Scout — the MQ-8C, is based on a Bell Helicopter model that is about twice as heavy. Bell is part of Textron Inc.

The first flight for the larger Fire Scouts is scheduled for this summer, Northrop Grumman’s Fleming said.

The entire contract for the larger fire Scouts has a ceiling of $262 million.

In a late 2011 interview, Northrop Grumman executive Mike Fuqua said the Fire Scout may help protect a ship against swarms of small boats. Swarming is a tactic where an adversary uses many small boats, working in concert, to harass a Navy ship.

The helicopter drone would be a natural choice if flying conditions on a particular day were too dangerous to send humans aloft, added Michael Toscano, president and CEO of the Virginia-based advocacy group AUVSI, the Association for Unmanned Vehicle Systems International.

The Navy has announced plans to put weapons on the Fire Scout in the future.

Sikorsky Aircraft Corp., which provides the helicopter for the smaller Fire Scout, is part of United Technologies. Another United Technologies unit, UTC Aerospace Systems, has a significant presence in San Diego County: it combined the businesses that San Diegans knew as Hamilton Sundstrand and Goodrich. The latter company’s aerostructures unit, once known as Rohr, has a significant presence in Chula Vista.

Stock in Northrop Grumman trades on the New York Stock Exchange under the symbol NOC. The firm had $25.2 billion in sales during 2012.

The manned helicopter in the Navy’s newest squadron, the Seahawk, carries a crew of at least three people. It is a descendant of the U.S. Army’s Black Hawk helicopter, built by Sikorsky Aircraft Corp. The current Seahawk Romeo variant has upgraded systems, including digital gauges replacing the “steam gauges” in the cockpit, Kakiel said.

“As the Navy’s first operational squadron with both manned and unmanned aircraft, HSM-35 heralds a new era for naval aviation,” the Navy said in a statement.

Incidentally, the name “Magicians” has some history. It belonged to an anti-submarine helicopter squadron also bearing the number 35, which the Navy decommissioned in 1992. Sixty squadron veterans were in attendance at the ceremonies at Naval Air Station North Island.

There will likely be more than one type of drone operating from the littoral combat ship.

The RMMV — remote multi-mission vehicle — is a 23-foot-long diesel-powered drone that swims just beneath the surface of the water and can help with tasks such as finding mines. Lockheed Martin is the prime contractor.