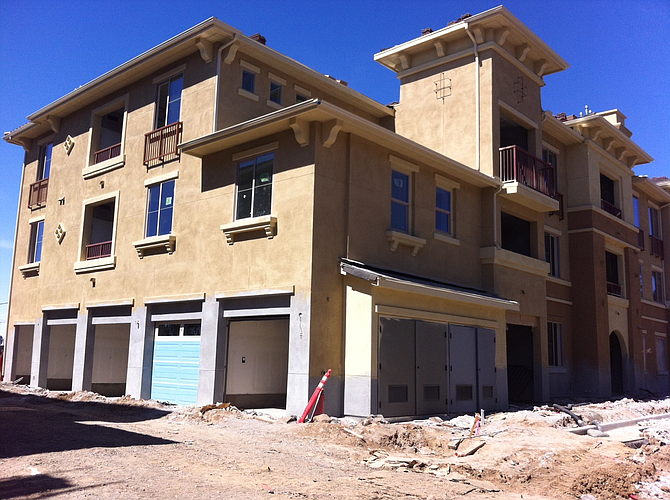 Residents of an apartment community soon to open in the Scripps Ranch neighborhood, developed by H.G. Fenton Co., will be the first in the region able to get all of their power from the sun, and track their usage on their smartphones.

Leaders of San Diego-based Fenton, as well as local utility and clean-energy experts, say the 114-unit Solterra EcoLuxury Apartments is also among the first market-rate multifamily complexes in the nation to be 100 percent equipped with rooftop solar technology and related monitoring gear.

Starting with the first move-ins in May, operators said, residents will also have access to garages pre-wired for electric vehicle charging, the latest energy-efficient appliances, and in-home Virtual Net Metering displays that let them monitor their kilowatt consumption. They’ll also be able to control their home thermostats remotely via mobile device applications.

“There’s much more consumer awareness these days about the resources that they’re using, and we’ve tried to incorporate these priorities into this project,” said Mike Neal, president and CEO of H.G. Fenton Co.

Solterra is the 13th San Diego County apartment community for the family-owned Fenton, which has been in business since 1906 and now oversees more than 3,100 apartment units, along with properties across other commercial real estate segments.

Neal said the company has deployed solar panel technology in common areas of several of its existing apartment communities. But this is the first to have all of its individual apartments powered with solar-generated electricity and equipped for high-tech control and monitoring by residents.

The privately held Fenton is not divulging its costs to develop Solterra, or its expected savings in power costs, though developers say the complex exceeds newly enacted state energy-use requirements by 19 percent.

“It does cost more to develop something like this, and we feel it’s very much worth it in the long run,” Neal said. “We have a philosophy of holding on to our properties for the long term.”

The collaborative so far has worked to enable solar and EV-charging projects at locations such as San Diego Zoo and Balboa Park, with organizers aiming to spread deployment to homes, businesses and public-access locations.

SDG&E also operates a separate Sustainable Communities program that uses lease-payment, marketing and other incentives to boost use of clean energy generation technologies. That program has been deployed in 35 local projects, including education, research and corporate facilities, as well as a La Mesa apartment community.

Jim Avery, senior vice president of power supply at SDG&E, said the Solterra project represents the “next generation” of residential-focused sustainability offerings. He noted that apartment communities built as recently as three to five years ago didn’t include the infrastructure needed to support the latest wireless and mobile monitoring technologies.

“To our knowledge, this is the first project in the country that brings the end consumer into the energy-use equation to this extent,” Avery said.

Avery said continued refinements in monitoring technology could make such offerings mainstream in apartment development in the next three to five years, as smart-phone-savvy consumers find it more convenient to control their power usage even when they’re away from home.

“If you know how much more it’s costing to run that air conditioner during certain times or operate that dishwasher, and you can actually control it, you’re going to make the necessary adjustments,” he said.

Holly Smithson, president of CleanTech San Diego, which has 115 member companies and organizations, said Solterra will be the first local community to put real-time power use decisions in the hands of residents on a daily basis. This has implications for public awareness and development of the larger sustainable economy as more projects get the technology.

“It’s almost like something out of ‘The Jetsons’ — it’s very futuristic,” Smithson said of Solterra. “Solar is just a sliver of the larger pie with that project.”

Preleasing is under way at the four-building complex on Erma Road near Scripps Ranch Boulevard, expected to be completed by summer, where monthly rents will range from $1,495 to $2,255. Photovoltaic systems will power community amenities including a restaurant-style bar, culinary kitchen, sports club, gaming center and cyber café, as a well as a private stand-up tanning salon.