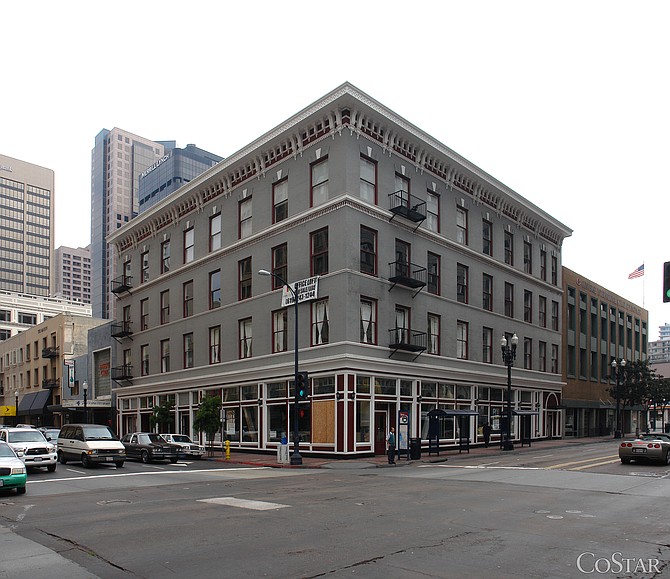 The downtown property long known as the Colonel Fletcher Building, which dates back to 1908, was recently sold for approximately $9.5 million.

A couple of San Diego buildings with long historical ties to the downtown area were recently the target of some high-profile transactions. One of those was the property that currently houses the Courtyard by Marriott San Diego Downtown hotel at 530 Broadway, off Sixth Avenue.

Philadelphia-based Hersha Hospitality Trust has purchased the 245-room hotel for $71.1 million. The hotel resides in the building that once housed San Diego Trust & Savings Bank, dating back to 1928.

Operators said elements of the original building were carefully preserved as part of a $5.8 million renovation completed recently by the hotel’s prior owner, Wheelock Street Capital LLC of Greenwich, Conn., and operator Sage Hospitality.

Hersha Hospitality Trust owns 65 hotels in seven U.S. markets, totaling 9,552 rooms. The company said in a statement that its San Diego purchase — its first in the local market — was part of its strategy to boost its position in high-barrier-to-entry markets with strong growth prospects.

Fletcher Building Gets New Owner: Not far from the Courtyard hotel, another vintage downtown building also recently changed hands. According to CoStar Group, MBK Properties LLC has acquired the property at 602-624 Broadway, long known as the Colonel Fletcher Building, for approximately $9.5 million.

The property, named for prominent local developer and civic leader Ed Fletcher, was built in 1908 and renovated into office loft condominiums in 2005.

Kearny Real Estate Co. of Los Angeles, which has a San Diego office, acquired the property in 2011 as part of a $196 million portfolio of property loans that it purchased in a partnership with Morgan Stanley Real Estate Investing. The prior owner was Taiwan-based Chinatrust Commercial Bank.

According to brokerage firm Cassidy Turley San Diego, which represented the seller, Icon plans eventually to demolish the restaurant and build a 50-unit luxury midrise residential development on the site.

“Banker’s Hill is a very hot residential market for development of condominiums, given its strategic midtown location and proximity to Balboa Park,” said Danny Fitzgerald, a broker in Cassidy Turley’s downtown office. Icon has developed other similar projects in Southern California.

The seller of the property was Mandarinhaus LP, with Blokhaus Development LLC as its manager. San Diego-based Blokhaus was led by the late local architect Graham Downes, and had previously announced plans to develop the Banker’s Hill site after acquiring it last year.

Industrial Building Sells for $6 Million: An El Cajon industrial building, which once served as the headquarters of Jeld Wen Windows & Doors, was recently purchased for $6 million by a partnership that includes Vision Systems Inc. of El Cajon and the Renner Family Trust of Santee.

According to data from CoStar Group, the seller of the 109,367-square-foot property, located at 1111 Pioneer Way, was Longkin Properties of Solana Beach. Brokerage firm Newmark Grubb Knight Frank represented the seller, and Inland Pacific Commercial represented the buyers.

Vision Systems makes aluminum glazing systems and related materials for the construction and architectural industries. It plans to occupy 30,000 square feet of the property, with the remainder currently occupied by agricultural equipment maker The Toro Co.