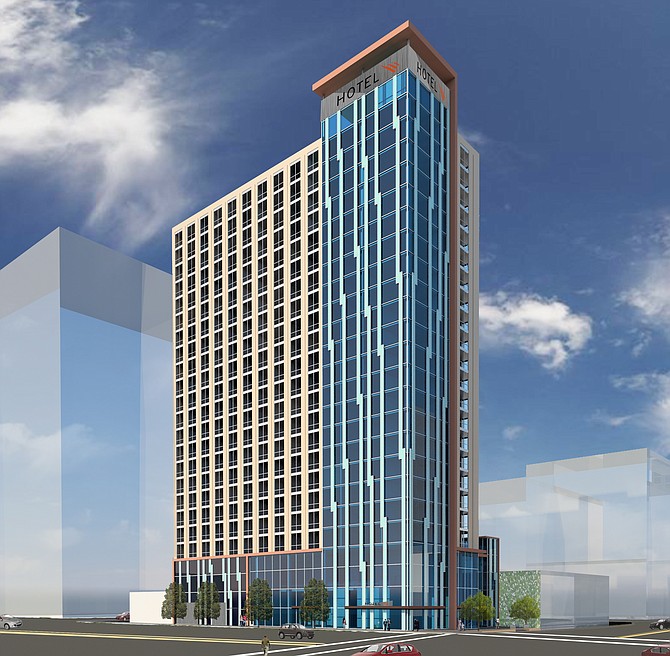 JR Legacy Holdings LLC has plans for a $65 million, 410-room hotel in downtown San Diego’s Columbia neighborhood, which some observers see as a sign of a continued thawing in financing prospects for large new hospitality projects.

Local civic planning committees this month are scheduled to review preliminary design plans for the Los Angeles-based developer’s 22-story project, as yet unnamed, proposed for a site at 401 W. Ash Street that is currently a parking lot.

According to documents filed with Civic San Diego, the city’s downtown development oversight agency, plans also call for 3,200 square feet of retail/commercial space and 133 parking spaces in two levels of subterranean parking. The project site is a 19,981-square-foot parcel located on the northeast corner of the block bounded by Ash, A, Columbia and State streets.

The project is being spearheaded by San Diego-based PierPoint Management LLC, which has overseen hotel projects on behalf of client developers throughout California. Michele Vives, a project manager with Tucker Sadler Architects Inc. who is overseeing the local approval process, said developers have tentative plans to start construction in the first quarter of 2014 and complete the project by the fourth quarter of 2016.

Developers remain in talks with potential hotel operators and commercial tenants. Vives said developers are aiming for a mid-priced hotel with a full-service on-site restaurant, a separate coffee or tea shop, and a few other retail or service businesses.

“The location is close to Little Italy and within walking distance of the Gaslamp Quarter, so it should get a good mix of business travelers and tourists,” Vives said.

Vives said the project arrives as developers are anticipating rising demand for hotel rooms over the next few years, especially if a planned $520 million expansion of the San Diego Convention Center is completed around 2016. Another key element is that financing prospects for hotel projects are now much better than they were just a year or two ago.

“The banks are becoming more comfortable with financing hotel projects,” Vives said. “That’s something that I started to see in early 2013, and it probably was not the case even in late 2012.”

The proposed Ash Street hotel is in the same neighborhood where locally based developer The Chhatrala Group has proposed Columbia Tower, a $100 million project that would include a 387-room, dual-branded hotel to be operated under the Hyatt Place and Hyatt Summerfield banners, with four for-sale condo units planned for the tower’s top two floors.

That 18-story project, originally proposed in 2007 and approved in 2010, is planned for a site on A Street, between India and Columbia streets. Developers could not be reached for comment on the project’s current status.

According to Civic San Diego, Chhatrala Group recently received a three-year renewal of its 2010 approvals, while it finalizes financing for the project.

Lucy Contreras, a senior planner with Civic San Diego, said officials this year have seen an uptick in developer inquiries about downtown projects, though most of the projects currently underway are mixed-use apartment developments, primarily in East Village.

“There does seem to be a rise in interest about hotel projects, although most of the current developments coming through or under construction are multifamily residential projects,” Contreras said.

Elsewhere in the downtown area, hotel projects garnering city and port district approvals over the past year have included a dual-hotel, 364-room project in the works at the former Fat City site on Pacific Highway, being built by T2 Development of Newport Beach; and a 400-room, dual-hotel development at the former site of Lane Field ballpark, being developed by LPP Lane Field LLC, which includes locally based Lankford & Associates Inc.

Robert Rauch, president of San Diego-based hospitality consulting firm R.A. Rauch & Associates Inc., said the local region is in the early stages of what could be a three-year run in new hotel development.

Building Rather Than Buying

That’s largely because interest rates remain historically low, even amid rampant talk that they could rise in the coming year as the economy improves. In the current climate, Rauch said, developers and lenders realize that the cost of building a local hotel in a prime location is often lower than buying an existing property.

Financing prospects in recent months have improved significantly from where things stood during and just after the Great Recession, when funding for hotel construction dried up. Well-capitalized hotel developers are now finding lenders willing to move beyond long-popular investment sectors like multifamily housing.

“The hotel financing climate is excellent right now,” Rauch said. “I would compare it almost to where it was in the 2004-05 period.”