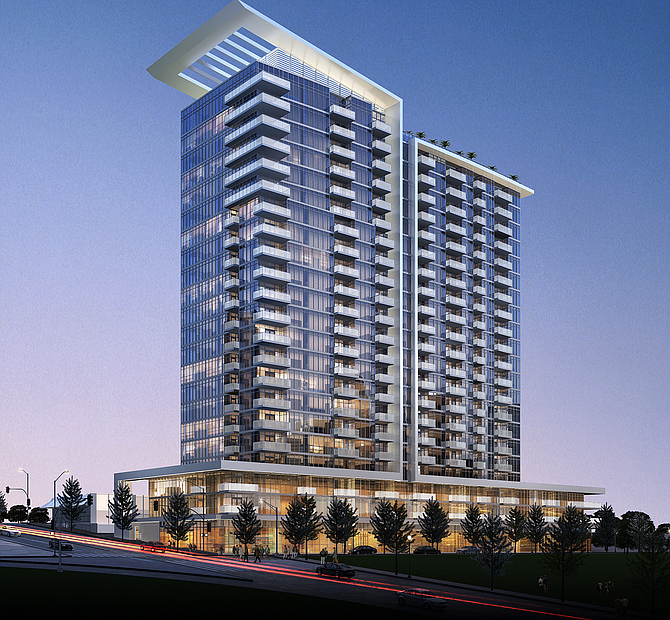 A new 279-unit apartment complex with other mixed-use amenities, proposed for an East Village site by MB Property Acquisitions of San Francisco, recently joined a growing list of multifamily projects either under construction or in the pipeline for downtown San Diego.

The project, currently listed with the project name Pacific Heights, would be located on the western half of the block bounded by A and B streets, Eleventh Avenue and Park Boulevard.

MB President Michael Blumenthal said developers are looking to begin construction possibly in the first quarter of 2014, with completion by early 2016. Like other developers, those spearheading Pacific Heights are currently focused on serving the burgeoning apartment market, but also watching for signs that downtown’s for-sale condo market could revive in the next two years.

Pacific Heights’ developers and investors were among those involved in past condo projects in San Diego, and they are considering building the new development as condos. “They were partners in the Palermo (230 units), Union Square (263 units) and Alta (179 units),” Blumenthal said in an email.

Some of the county’s apartment projects were originally envisioned as for-sale condos, but converted to apartment offerings after the housing market crash that preceded the Great Recession. While a few new local condo projects have been announced during the past two years as the housing market has recovered, there is not significant construction currently underway.

Alliance is nearing completion on the 199-unit Broadstone Little Italy, a six-story apartment complex where it is looking to begin renting out the first units this fall. Alliance in 2011 acquired the 1.3-acre site off Kettner Boulevard, which had previously been entitled for condominiums under a prior developer that was unable to obtain financing.

“We have a lot of people on our interest list for Broadstone Little Italy,” Yanicelli said, noting the project is drawing interest from young, upwardly mobile professionals looking to rent in urban areas near job hubs including downtown and Kearny Mesa.

A similar contingent will likely be the tenants at two other local Alliance apartment projects where construction recently began. Openings are set for late 2014 at Alliance’s 100-unit community at Fifth Avenue and Thorn Street in Banker’s Hill, and a 360-unit project underway off Aero Drive in Kearny Mesa.

“Kearny Mesa especially has a lot of workers employed in health care, with hospitals there like Sharp and Rady,” Yanicelli said. He said that the company is also looking to serve a large contingent of workers employed at several distribution centers, government contractors and medical supply firms in Kearny Mesa.

Earlier this year, San Diego County placed sixth in brokerage firm Marcus & Millichap’s 2013 annual ranking of the nation’s strongest apartment markets, based on factors including supply and demand, construction trends, job creation and the overall health of the local economy.

The local region held its national ranking from 2012 in the report, intended to serve as a guide to multifamily investors. San Diego was among five California metro markets placing in the top 10 this year, joined by San Jose (No. 2 after New York City), San Francisco (No. 3), Orange County (No. 4) and Los Angeles (No. 10).