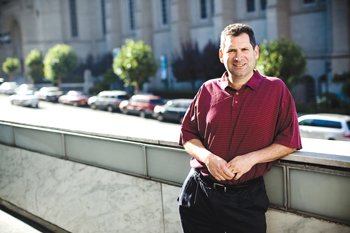 Funding: Undisclosed startup funds, plus $7.65 million in Series A financing from Avalon Ventures.

What makes the company innovative: It has licensed technology from UC San Diego, and its Nobel prize-winning biochemist Roger Tsien, that uses fluorescent protein particles to detect cancerous cells.

Key factors for success: The company’s technology can meet an unmet need — allowing surgeons to more effectively target cancerous tissues during an operation. According to the company, its method has proven safe in animal models, and the company is headed toward clinical trials.

When a cancer patient is on the operating table, surgeons have to determine on the spot which lymph nodes are healthy and which need to be removed.

It’s an onerous and still-inexact process that requires a pathologist to analyze the tissue sample while a patient is still under anesthesia. Even then, the extent of the cancer isn’t easily determined, so surgeons often err on the side of caution and remove more tissue than necessary.

Researchers at UC San Diego are working with La Jolla-based Avelas Biosciences Inc. to develop a technique to identify exactly which tissues need to be removed during surgery. The aim is to decrease time spent on the operating table, and potentially decrease the need for secondary operations, radiation and chemotherapy.

“The medical community is under immense pressure to reduce costs and improve patient outcomes,” said Avelas CEO Jay Lichter. “With high surgical procedure costs and operating rooms costs coming in over $60 per minute, it is clear that advances that reduce a patient’s time in the OR are needed.”

The core research comes from Roger Tsien, a UCSD biochemistry professor who was awarded the 2008 Nobel Prize in chemistry. A real-time diagnostic technique developed by Tsien and his colleagues at UCSD allows surgeons to detect cancerous tissue by injecting a fluorescent protein fragment into a patient’s bloodstream. This molecule will attach to the surface of cancer cells, so that through a special camera doctors will be able to detect exactly which tissues are diseased.

“This could have a huge impact on the way we treat cancer patients,” said Quyen Nguyen, associate professor of Head and Neck Surgery at the UCSD School of Medicine and a key researcher on the project. “Not only could it reduce costs and readmissions, but it could reduce complications like swelling, pain and sometimes extensive internal damage that come with lymph node removal.”

UCSD continues to work on the basic research, and Avelas is focused on bringing it from pre-clinical to clinical trials. It hopes to gain clearance this year from the U.S. Food and Drug Administration. Lichter said that the fluorescent probe has proven safe in animal models.

Avelas Biosciences was formed in 2009 with the specific intent to license UCSD’s technology and ultimately bring it to the market. Avelas was initially funded by Avalon Ventures for an undisclosed sum; Avelas closed $7.65 million in Series A financing last month.

Lichter said the company is in open discussions with multinational biopharmaceutical companies, and will “hopefully announce a partnership or financing before too long.”

The technology has several applications — for instance, in addition to detecting cancerous lymph nodes, it can discern cancerous lesions in colon cancer long before they are visible through a colonoscopy, Lichter said.

The research is still a solid five to seven years away from commercialization. Lichter said the market potential for this technique is huge. He projects that the breast cancer market would be $200-300 million, and margin detection — evaluating the extent of a cancer — could mean $300-400 million.

“Add in colon cancer, and this could certainly bring in over a billion dollars in revenue,” Lichter said. “That’s just a gigantic market. It’s a highly innovative, clever new technology for an unmet medical need.”