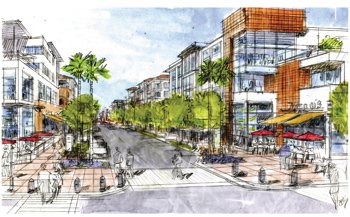 Locally based Corky McMillin Cos. expects to break ground by mid-year on the long-discussed Millenia mixed-use development in Chula Vista.

Prominent local builder The Corky McMillin Cos. will be responding to the newly awakened housing market by pressing forward this year on two San Diego County projects long delayed by a sluggish economic recovery.

Quarry Creek, the company’s proposed 656-home development on a rehabilitated former quarry property in Carlsbad, is expected to go before city planners in February. And the company’s $4 billion mixed-use Millenia development in eastern Chula Vista is expected to break ground by mid-year, with a first phase of approximately 750 residential units in the works.

“We think there are elements that are lining up, so that we should be able to benefit from this recovery,” said Todd Galarneau, senior vice president with San Diego-based Corky McMillin Cos.

The 210-acre Millenia, in planning over the past five years, is being developed by McMillin and Dallas-based Stratford Land. It is envisioned as a high-density urban village that could eventually have up to 3,000 residential units when fully built out in coming decades.

The first phase, to be developed over a six- to eight-year span, will likely include a mix of apartments and for-sale condominiums, with a mix yet to be finalized. Galarneau said local developer Sudberry Properties is scouting tenants for what would be a gateway retail center for Millenia, and McMillin is in talks with various other developers to build hotels and office buildings in the first phase.

In addition to an improving housing market, Galarneau said McMillin is basing its planning on a belief that Millenia can now benefit from recent infrastructure improvements in the South County region and others on the way, such as a proposed border crossing terminal serving the Tijuana airport. Millenia also has close proximity to the county’s Brown Field regional airport.

The developer anticipates that a rising presence of global firms’ manufacturing facilities south of the border could raise demand for administrative offices in South County, and those offices might locate at Millenia. Workers at those offices might also choose to live at Millenia, and hotels on the property could serve corporate travelers as well as visitors to local attractions, such as SeaWorld’s upcoming Aquatica waterpark in Chula Vista.

McMillin is also looking to break ground by late 2013 or early 2014 on the residential component of Quarry Creek, part of a larger development at the border of Carlsbad and Oceanside. Homes would be served by a retail center that is already operating on the Oceanside part of the property.

While it is not low-income housing, Galarneau said the single-family homes at Quarry Creek are slated to be built in a higher-density setting than might otherwise be found in a rural setting. Plans incorporate walkable spaces, bike paths and close proximity to public transit options, in order to reduce vehicle trips.

“We think this is an example of the kind of smart development that we have done previously, and that also fits well with what Carlsbad is looking for,” Galarneau said.

However, experts note that the region retains several elements that have traditionally kept local housing development from keeping up with rising demand during periods of economic recovery.

Alan Nevin, principal in the San Diego consulting firm The London Group, said the local single-family housing supply began a catch-up phase in 2012, which will likely continue in 2013 and possibly the next two years.

Like Orange County, he said the San Diego region has a climate marked by limited land availability, relatively long entitlement processes and high builder fees, and a financing climate weighed more in favor of apartment development than the financing of single-family lot acquisitions. After lots are acquired, the process of entitling and building single-family homes can span two or three years.

“The past year was a very good year for new housing here,” Nevin said. “The problem is that we do not have a sufficient number of lots ready and available to meet what the demand is calling for.”

One result already emerging, he said, is a return to trends of nearly a decade ago, when rising land and home prices spurred North County residents to look toward Southwest Riverside County for more affordable properties. While there is little room left for new construction in that region, Nevin said resale properties there could see sales rise in coming months among buyers who work in North County and don’t mind commuting daily from the nearby region.

Galarneau noted that McMillin also remains active in regions such as Riverside County, where it continues to work with partner home builders on projects including its 700-acre, master-planned Summerly development in Lake Elsinore.