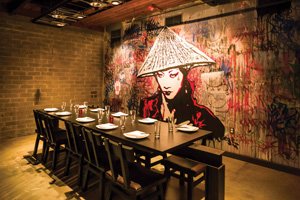 Architect Graham Downes did the design work for Gang Kitchen, a ‘mixed-Asian’ fare restaurant that recently opened in a former industrial site in the Gaslamp Quarter.

A report by the brokerage firm Jones Lang LaSalle notes that the professional, scientific and technical services sectors added 1,700 jobs locally in the past year — a big chunk of the overall 23,500 jobs added. Tech’s impact is reflected by the fact that some of 2012’s biggest leasing transactions involved technology-oriented companies.

Political and economic uncertainty — including the recently settled “fiscal cliff” drama — put a damper on office leasing in the fourth quarter. But JLL says continued tightening of the market is expected in 2013, with rising leasing activity, declining vacancies and appreciating rents.

What’s Old Becoming New Again Downtown: A group led by local architect and developer Graham Downes, whose work is on display throughout the city, is looking to transform a complex of three older industrial buildings in Little Italy into other office and retail uses.

Wonderhaus LP, with Downes as its managing director, recently purchased the buildings on Kettner Boulevard and Juniper Street for approximately $3 million, according to Colliers International, which represented seller GTF Properties.

Purchased were three buildings with a total of 14,814 square feet of space, at 2228 and 2266 Kettner Blvd. and 925 W. Juniper St. According to CoStar Group, 2228 Kettner was built in 1978 and was most recently used by building products supplier Helix Wholesale Co. The other Kettner property is a warehouse built in 1920, and the Juniper Street warehouse was built in 1969.

The handiwork of Downes, an internationally known architect, can also be seen at Gang Kitchen, an Asian restaurant that recently opened in a 5,000-square-foot former industrial warehouse space on Sixth Avenue in the Gaslamp Quarter. Owner Jon Mangini, who is also proprietor of Basic Urban Kitchen in East Village and URBN Coal Fired Pizza in North Park, said Downes’ work actually helped “deconstruct” the space back to its original raw interior, including its 25-foot ceiling and steel and concrete finishes. The site most recently housed the Industry Showroom arts and design workspace.

A company statement did not disclose the name of the seller, but said the portfolio was previously owned and operated by a Southern California family. The grocery-anchored properties total 444,000 square feet and are located in Cypress, Redondo Beach, Garden Grove and Diamond Bar.

The Diamond Bar transaction is expected to close in the first quarter of 2013. President and CEO Stuart Tanz said the company during 2012 completed $278 million in shopping center investments, surpassing its target for the year.

Retail Opportunity Investments Corp. is a publicly traded real estate investment trust focused on community and neighborhood shopping centers. Last year it moved its corporate headquarters from New York to a commercial center that it owns at University Towne Center.