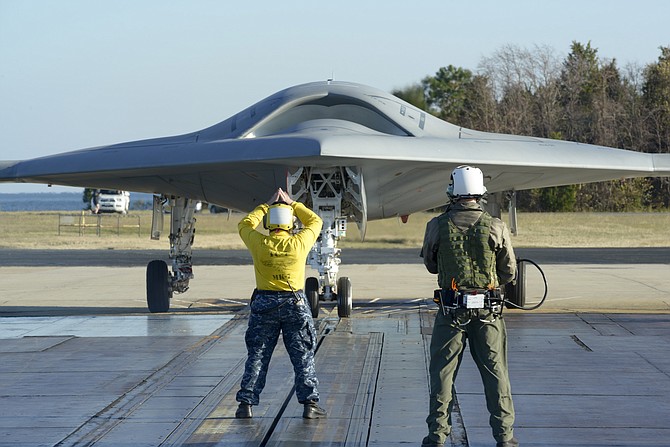 On a simulated aircraft carrier flight deck in Maryland, a yellow-shirted U.S. Navy aviation boatswain’s mate directs an X-47B unmanned aircraft. Since there is no pilot in the aircraft, a deck operator watches the “yellow shirt” and relays his commands to the aircraft using an elaborate, arm-mounted console.

While the U.S. Navy prepares for further tests of its X-47B aircraft — an existing, experimental unmanned plane designed to fly off of aircraft carriers — as many as four prime contractors are positioning themselves to build the next big thing.

It’s called the UCLASS. Its price tag? Billions of dollars.

While there is pressure on the U.S. Defense Department to cut its budget, Ron Stearns, an analyst with G2 Solutions LLC in Washington state, says the UCLASS project is bound to happen. The Navy wants the capability to fly a drone off of an aircraft carrier by the early 2020s, Stearns said, adding that if the service wants to adhere to that schedule, it needs to start work.

Northrop built the X-47B demonstrator. Asked if the company wants work on the next project, Northrop executive Carl Johnson was emphatic. “Absolutely,” he said.

UCLASS stands for “unmanned carrier-launched surveillance and strike aircraft.” The Navy will release its draft request for proposals for the UCLASS in the next couple of months, said Jamie Cosgrove, spokeswoman for the Naval Air Systems Command.

The draft request for proposals will be coming after a delay. Stearns and other observers say the Navy seems to be weighing what capability it would like to emphasize in the new plane. An aircraft optimized for spy missions would likely be different from an aircraft designed primarily to deliver weapons.

In its fiscal 2013 budget, the Navy allocated $2.4 billion for UCLASS, Stearns said, adding that the service spreads those funds between 2012 and 2017. The fiscal 2014 budget is due out soon, the analyst said, adding that he wants to see whether and how those numbers have changed.

“I still do feel it’s a priority for the Navy,” Stearns said.

A recent report from the National University System Institute for Policy Research estimated that the unmanned aircraft business supported 7,135 jobs in San Diego in 2011. The number counts both direct and indirect employment. Most employment is in North County.

Laying the foundation for the UCLASS effort is an X-plane.

The planes went together in the Palmdale area, but Northrop has done much of its software development in Rancho Bernardo.

In recent months, Northrop’s San Diego lab has been testing how all the disparate software for operating the aircraft works together. Northrop wrote some of the software. The Navy wrote other portions.

The unmanned X-47B made its first flight two years ago. Since then it has taken off and landed at Navy bases. The X-47B has also been launched from an aircraft carrier-style catapult, though that test also took place on land.

So far it hasn’t taken off from an aircraft carrier, or made a tailhook-assisted landing at sea. That might happen this year.

Late last year, a combined Navy and Northrop crew maneuvered the aircraft around the flight deck of the USS Harry S. Truman while the ship was under way in the Atlantic.

According to Northrop officials, it has taken some doing to integrate unmanned aircraft into the world of the carrier flight deck.

Under the standard way of doing things, people standing on the flight deck send visual signals to an aircraft’s pilot. Specifically a “yellow shirt” — more formally known as an aviation boatswain’s mate (handling) — gestures to tell the pilot to perform certain tasks.

The Navy and Northrop worked together to translate those time-honored gestures into unambiguous digital signals for the drone. How? By putting another person into the loop, and adding more technology.

An intermediary called a deck operator wears an elaborate, arm mounted console that wirelessly controls the aircraft’s throttle, brakes and steering while it is on the flight deck. That person watches the yellow-shirt and relays his signals to the drone.

Then there is the matter of electronic “noise.”

According to a Northrop spokesman, one challenge in engineering the X-47B has been making it work properly in an area replete with other strong radio signals — including radar.

So the Navy and Northrop have been testing radio reception at all points on the aircraft carrier deck, Northrop officials said.

Johnson said he didn’t know when the X-47B will go to sea again — or which carrier the Navy will assign for the tests. That’s up to the Navy, he said.

“We’re not the only ones asking for time” aboard an aircraft carrier, Johnson added.