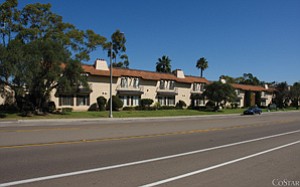 The Casa Diego apartment complex in Spring Valley recently changed hands in a $9.57 million transaction, according to CoStar Group.

Joyce Masterson, who has worked for the city for 25 years, was named as director of economic development and community relations.

Masterson was most recently assistant to City Manager Clay Phillips, a position she held for 10 years.

Masterson, who holds a bachelor’s degree from Brooklyn College, will earn a salary of $122,612.

Williams, a member of SMEDC since 2009, became a LEED Accredited Professional through the U.S. Green Building Council in 2009. He obtained a bachelor’s degree in civil engineering from California Polytechnic San Luis Obispo.

The organization brings together leaders in the public and private sectors to advocate for the economic interests of the city, according to SMEDC.

Casa Diego, a 74-unit apartment complex in Spring Valley, has been sold to an undisclosed buyer for $9.57 million, according to CoStar Group.

Investment Property Group represented both the buyer and the seller, Casa Diego Associates of Spring Valley.

A statement from Los Angeles-based George Smith Partners said a New York investment management company provided the equity for the coastal project. Ocean Street Condominiums is planned for a site currently occupied by a 51-unit apartment complex that Zephyr purchased in 2011 and has since obtained entitlements to demolish.

Zephyr and the equity provider will now seek construction financing, with plans to break ground later this year and complete the project in 2014.

The project at 2303 Ocean St., in downtown Carlsbad, will include three-bedroom condos of approximately 2,210 square feet in size. It will also include luxury amenities including a resort-like pool and fitness center, the statement said.

The city of La Mesa was recently designated a “Fair Trade Town” by the Pennsylvania-based Fair Trade Towns USA, a nonprofit group that advocates for the sale of products produced by businesses that adhere to socially and environmentally responsible practices.

La Mesa residents and businesses supporting sustainable and community-supportive global production policies registered a campaign with the organization in 2011. A statement from Fair Trade Towns said La Mesa is among 30 cities nationwide and more than 1,200 globally that have received the designation.

Local organizers are looking to mark the designation with a World Fair Trade Day in May, with La Mesa merchants and organizations planning activities including a Fair Trade Gift Faire.

Maxwell, who died in 2010, trained as a bomber pilot in Alabama as one of the famed Tuskegee Airmen during World War II, and was among the nation’s first African Americans deployed for combat flight.

He was once president of the San Diego Chapter of the Tuskegee Airmen, later serving on its board of directors, and also served on community boards including San Diego County Regional Airport Authority. The nonprofit Oceanside Airport Association is raising funds for a monument and sign to carry the new name, with a dedication ceremony planned for later this year, according to the association.

The 43-acre Oceanside airfield is a general aviation airport with one runway and fuel services. It is operated by Airport Property Ventures.

An additional 50,000 cards were distributed to residents, with the bulk being mailed to homeowners by the city’s trash hauler, Republic Services, the city said.

So far, some 80 merchants are participating in the program, with discounts ranging from 10 to 25 percent off the purchase price, and some “buy one, get the second one free” deals, said spokeswoman Anne Steinberger.

Residents can use the cards at merchants who display the program’s decal on the store’s window.

Funding for the cards and operating the program cost the city about $50,000, Steinberger said.

The winery owned by identical twins Brian and Alan Haghighi makes about 10 flavors of fruit wine produced on a seasonal basis. It’s rolling out a pomegranate wine Feb. 16 at a party thrown for all its Kickstarter investors.

“We’ve recently expanded our operation, purchased new tanks and have nearly all the equipment needed to produce 20,000 bottles of wine a month,” said Brian Haghighi.

Poway city leaders are mulling whether to relax sign regulations for the city’s auto dealers.

At issue are attention-getters such as searchlights or giant, inflatable signs. City officials are also considering relaxing the rules on tents, as well as pennants strung between parking lot lights.

Right now searchlights and inflatable devices are allowed only during a business’ grand opening. City officials are considering whether to allow them over the Fourth of July weekend and three other weekends per year.

Residents and business owners weighed in on the matter during a recent City Council meeting.

The issue is scheduled to return to the council on Feb. 19. The city’s planning department will take the wraps off proposed changes when they issue a staff report a week in advance of the meeting, said a city planner.