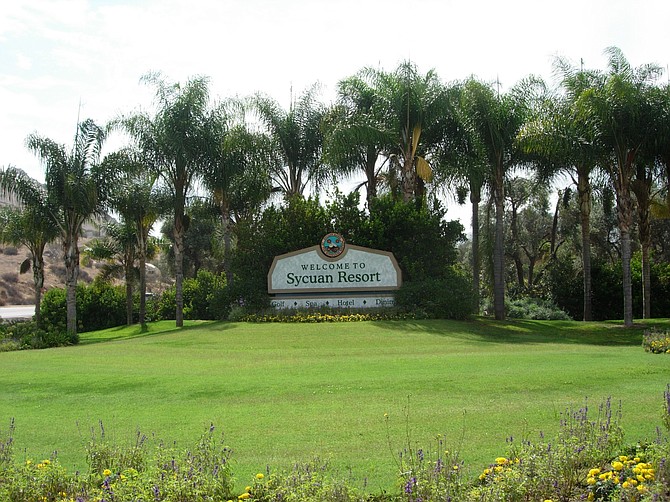 Sycuan expands its reservation boundaries by about 1,370 acres with plans to leave 85 percent of that as open space. Photo by Brad Graves.

The Sycuan Band of the Kumeyaay Nation expanded the acreage of its reservation east of El Cajon nearly threefold this month.

The American Indian tribe already owned the Sycuan Golf & Tennis Resort a few miles west of its casino. It owned the river valley that connects the golf course to the band’s historic, 1875-era reservation like the grip of a barbell.

Sycuan’s tribal government spent at least $2.5 million to do the legal work of expanding reservation boundaries around 1,370 additional acres, for a total of more than 2,000 acres.

Tribal leaders said they did it not just for economic development, but for other reasons as well.

They say they want to build more houses on the reservation, manage their property in the manner of a government and preserve what’s left of prehistoric settlement sites. The river valley is rich with cultural resources, according to an environmental study supporting the project.

The expansion is testament to the prosperous casino and hospitality business that Sycuan runs, both in the Sweetwater River valley and elsewhere. In California, a large American Indian casino can generate hundreds of millions of dollars of gaming revenue — defined as the difference between gaming receipts and payouts — per year. On American Indian reservations, such money goes to tribal governments. Sycuan’s government and businesses, including the US Grant hotel in downtown San Diego, employ more than 3,000 people.

Sycuan used $40 million in gaming revenue to buy the Singing Hills golf and tennis resort in 2001. It bought the sand mining operation in the river valley for $25 million in 2003, and then shut the operation down, Day said.

The tribal government asked the U.S. government in 2007 to put the land into trust for the tribe: in other words, make the land part of the Sycuan reservation, and no longer under county control. The six-year turnaround time on the federal paperwork was “record pace,” Day said, noting that a Santa Barbara-area tribe has waited 13 years for its similar project.

The cost of putting the land into trust is hard to quantify, Day said, estimating that Sycuan spent a minimum of $2.5 million on staff and consultant costs.

More spending is ahead.

Sycuan plans to improve the intersection of Dehesa Road and Harbison Canyon Road, which is on the route to the casino. Up to 20,000 people per day pass through it. The $800,000 project is one future contracting opportunity, Day said.

An important economic development project would be building on 46 acres at the corner. The tribe is considering a gas station; the nearest filling station is at least seven miles away, Day said. People have also suggested putting a commercial office building, a laundry, a tobacco shop and a lumberyard there.

Another attempt to diversify business is a planned, 25-space recreational vehicle park on the new property.

On the housing front, Sycuan expects it will need 70 more homes for tribal members in the next 30 years. Housing “still is the No. 1 priority” for the Sycuan Band, Day said. New housing will be an additional opportunity for contractors. The tribe is debating whether to place units together in apartmentlike clusters.

The golf and tennis resort might eventually see some changes, Day said. The holes are “pretty short,” and the hotel may one day be replaced. Farther west, the tennis courts might be moved to a less culturally sensitive place than the floor of the valley, which is home to some historic sites.

Though critics of the tribe have alleged that Sycuan might put a casino at its golf and tennis resort, Day denied the assertion. He said the band has spent too much on its existing casino, including a recent, $30 million renovation and a $65 million parking garage.

“No businessman’s going to pick that up and just move it down here,” Day said, seated at the golf resort’s restaurant. “It just makes no sense.”

Putting casino games on new portions of the reservation would trigger a new environmental review, which could take six years or longer, he said.

County Supervisor Dianne Jacob, who represents the area around the Sycuan reservation, has been critical of reservation expansion. Jacob has been concerned about the loss of land-use control and tax revenue, a spokesman said.

With the land as part of the reservation, hotel and sales taxes will no longer flow to local governments. Sycuan agreed to pay the county $3.37 million to make up for that and improve roads.

As another part of the recent transaction, some 600 acres to the south of the reservation were sold to a nonprofit organization, the Kumeyaay Diegueno Land Conservancy.