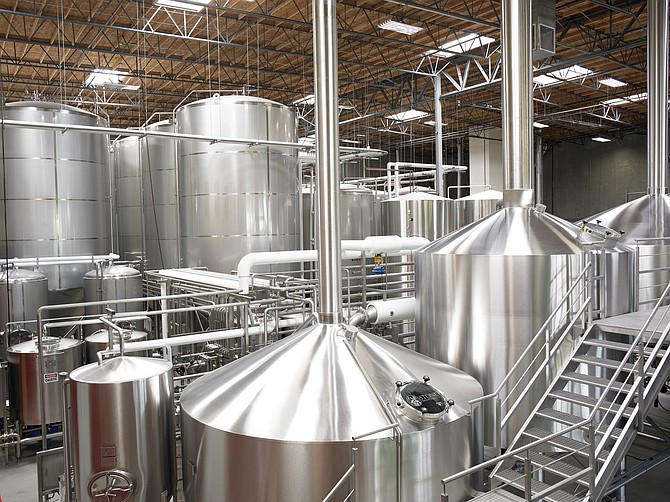 Stone Brewing Co. was recently ranked the 10th largest craft brewer in the nation. Last year it produced 177,000 barrels (a barrel is 31 gallons); this year it is on track to do more than 210,000 barrels.

Things are ramping up at Societe Brewing Co. in San Diego. Opened about a year ago, the craft brewer is on track to produce about 2,400 barrels of beer this year but that will certainly rise when it installs two new tanks sometime this summer, says Doug Constantiner, chief executive officer.

“When we get those new tanks we think we can do about 3,000 barrels this year,” Constantiner said. “That means our production will increase by 66 percent.”

Societe, one of about 60 breweries in the county, is part of this area’s wildly successful and ever-expanding craft beer industry. The size of the industry was the subject of a recent study by National University System Institute for Policy Research which tabbed its economic impact at $299.5 million.

That figure is based on 2011 data, which is surely much higher today given the fact that several more breweries were launched and several others, such as Societe, expanded their operations.

According to the study done by senior policy analyst Vince Vasquez, the nearly $300 million in economic impact is 1.5 times greater than Comic-Con International, the area’s biggest trade show.

The impact included total revenue of $681 million, and total employment of 1,630 people. The majority of these —1,133 — are employed at brew pubs; the remaining 497 were at the breweries.

Societe is indicative of the trend. Over the year, it added 11 workers to bring its total to 13. If things go according to plan, Constantiner says he could be bottling his beer by 2015, and expand its market beyond San Diego. Today, he sells his beer in kegs to 90 customers, mainly brewpubs and restaurants.

Because of all the new breweries, the question of over-saturation arises, but Constantiner scoffs at that notion.

“We’re not even close to the saturation point,” Constantiner said. “If we had 150 breweries and they’re all making quality beer that would be fine.”

The industry’s rapid growth isn’t just benefiting local brewers. It’s spurring growth in other businesses through building new facilities, buying new equipment and materials, and in the number of tourists visiting the area because of San Diego’s craft beer reputation.

Greg Koch, chief executive and co-founder of Stone Brewing Co., recently ranked the 10th largest craft brewer in the nation, says the numbers of visitors coming through his Escondido brewery is a little shocking. “We had 600,000 recorded visitors last year, and about 60,000 that came on tours,” Koch said. “We’re the third largest visitor destination behind Safari Park and Legoland.”

Stone’s growth trajectory hasn’t waned since its founding in 1996. Last year it produced 177,000 barrels (a barrel is 31 gallons); this year is on track to do more than 210,000 barrels. Next month, Stone opens a new brewery/ restaurant at Liberty Station that creates some 240 jobs, although the vast majority of these are contract workers.

All totaled, Stone has 557 employees, up from 438 one year ago, the company said.

Among other related businesses seeing increased sales are tour operators such as Brewery Tours of San Diego, which expanded its fleet recently with the purchase of a 40-passenger bus to go with its three other buses and a van, said Jon McDermott, who founded the company with his wife, Mindy, six years ago.

While McDermott didn’t reveal dollars, his revenue grew 15 percent over the year, and staffing was up to 10 employees, including two in the Bay Area.

Chris White, founder and president of White Labs, provides yeast, an essential ingredient to beer, said his business has been growing about 30 percent annually in the past few years, without revealing dollars.

White Labs installed a small brewery and tasting room at its Miramar site last year, as well as expanding its production to fill the increased orders from breweries. Employment grew by about 20 people over the year to 70.

“The growth has taken everybody by surprise, even people who’ve been in the industry a long time,” White said of the business he founded in 1995.

Scripps Ranch-based Ballast Point Brewing and Spirits, ranked the 46th largest craft brewer in the nation based on its 47,000 barrels last year, said it expects to easily surpass that number this year.

Jack White, co-founder and chief executive of Ballast Point, said the brewery is adding five new tanks by year-end that will double its capacity to 100,000 barrels.

The brewery nearly doubled its staff to 80 over the past year, but White’s not done by any stretch. Over the next year, the business will likely hire an additonal 25 people.

In the next three to four months Ballast Point will open a five barrel production line and tasting room in Little Italy. The company also purchased brewing equipment from a 150-barrel brewery in Germany, and is looking for the right place to set up shop. “We’re hoping to build it in San Diego County,” White said.