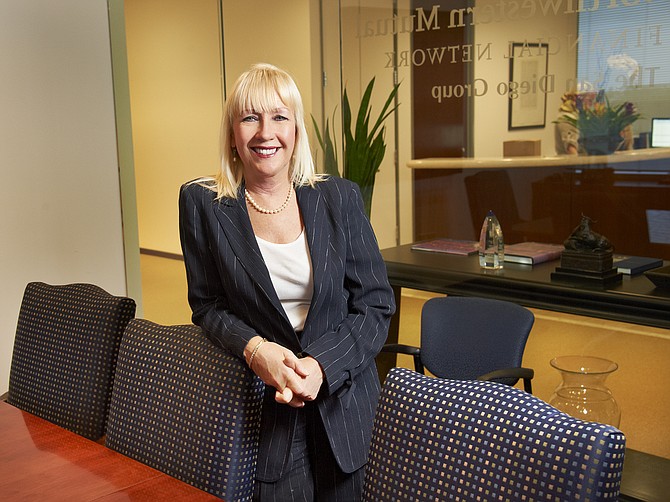 Candace Berkman, a San Diego-based agent with Northwestern Mutual Life Insurance Co., says long-term care is one of the biggest challenges facing baby boomers and that long-term care needs are an important part of a comprehensive financial plan to protect assets. Photo by Stephen Whalen.

But the fact remains that long-term care insurance is costly, complex and has become increasingly difficult to get.

Long-term care policies are supplemental benefits to provide coverage not given by health insurance, Medicare or Medicaid. Rather, they are designed to kick in for aging policyholders when they are simply unable to perform basic activities like dressing, bathing or walking.

“Long-term care is one of the biggest challenges facing baby boomers,” said Candace Berkman, a San Diego-based agent of the Northwestern Mutual Life Insurance Co. “We’re seeing more employers and more individuals interested in addressing long-term care needs as part of a comprehensive financial plan because what long-term care insurance does is protect income and assets.”

But such plans aren’t cheap. Average annual premiums range from about $150 to $350 per month, getting more expensive the older the initial enrollee, according to a recent report from the AARP Public Policy Institute.

The cost for group insurance is, however, typically 30 to 50 percent lower, said Kevin Sypniewski, CEO of San Ramon-based eldercare brokerage AgisNetwork Inc. This attracts employers to sign up for these more lucrative rates — particularly since the employee typically fronts the whole cost.

In 2010, between 7 and 9 million people had long-term care insurance in the U.S., the AARP report said. The policies generally reimburse between $100 and $200 per day for assisted living — which is significant, given the rising cost of assisted living care.

The annual cost for a semiprivate bed in a San Diego nursing home is $83,950, according to 2013 estimates from Richmond, Va.-based insurance company Genworth Financial Inc. A private room runs, on average, $109,500 each year, and the average stay has grown to 2.5 years.

These costs are increasing about 5 percent each year — placing long-term care insurance options on the radar for many employees, particularly those of the baby boomer generation.

And there’s a litany of benefits for employers to offer these plans, Sypniewski said — and most of it stems from cultivating talent, improving employee health and curtailing costs associated with employee absenteeism.

Employees can purchase the plans for themselves or for family members, which could ultimately lessen their burden of care giving.

“The average age of a caregiver is just below 50, and so we have these ‘tweeners’ in the workforce — people who still have kids at home, and have to also take care of their parents,” he said. “The stress level on these folks is just absolutely incredible, and employers are seeing that it starts to affect employee attendance and employee health.”

A quarter of adult children care for aging relatives, according to a 2010 study from insurance carrier MetLife Inc. The study found that the time from work this takes from employees, and the impact these stresses have on their own health, costs U.S. employers $13.4 billion per year.

“With a full-time job, kids at soccer, and an additional 20-30 hours a week of caregiving, the first thing to go is an employee’s health,” Sypniewski said. “The meal plan’s a drive-thru, they skip the mammogram, and don’t stop smoking even if an employer has a wellness plan. It’s all-consuming for an employee, and their employer pays for that.”

“There’s not really a lot of resistance to offering long-term care — it makes rational sense for an employer to do so,” Duenas said. “Of course, with the rising cost of health care, companies aren’t looking to add corporate expense. But that’s why it’s offered on a voluntary basis — it’s just a tool to help employees get a discounted rate.”

But offering long-term care insurance has become a complicated endeavor, because many insurance providers have completely backed out of the group market, said Bill Murphy, a principal in the employee benefits division at San Diego insurance brokerage Barney & Barney LLP.

“It’s a very shaken-up industry on the insurance carrier side,” Murphy said. “That’s because when they designed the product, the insurance companies didn’t really do a great job in creating pricing models.”

In recent years large companies like MetLife and Prudential Plc have dropped the group option for long-term care entirely. John Hancock also bowed out of the group market, but has since reentered — with significantly higher rates.

Rate hikes span from 6 to 17 percent, according to the American Association of Long-Term Care Insurance. For existing policyholders, these rates have nearly doubled in some cases.

This is due in part to the increasing costs of home health and nursing home care. But it’s also because when these policies were first introduced about 30 years ago, actuaries estimated that a certain number of policyholders would lapse — they’d drop coverage.

But while lapse rates were about 8 percent in the 1980s, they’ve dropped to below 3 percent today, Sypniewski said. People are holding onto their policies, and many insurers found that offering cut-rate plans to employee groups to be unsustainable.

“Lapsed policy holders mean free money for insurance companies,” Sypniewski said. “But what they found was that if people buy long-term care insurance, they keep it forever.”

It isn’t helped by the fact that Americans are, as a whole, living longer and spending more time in these expensive care facilities.

The Affordable Care Act initially included a provision called the CLASS Act that created a voluntary and public long-term care insurance option for employees. In 2011, however, the Obama administration announced that it was unfeasible as it wouldn’t generate enough revenue to stay operational. It was officially repealed on Jan. 1 this year.

“Now, as you have people from frontline manufacturing to C-suite executives all dealing with caring for parents, spouses or siblings, all of a sudden, people are saying, ‘Hey, we need to do something,’” Sypniewski said. “As awareness grows, so has the demand.”