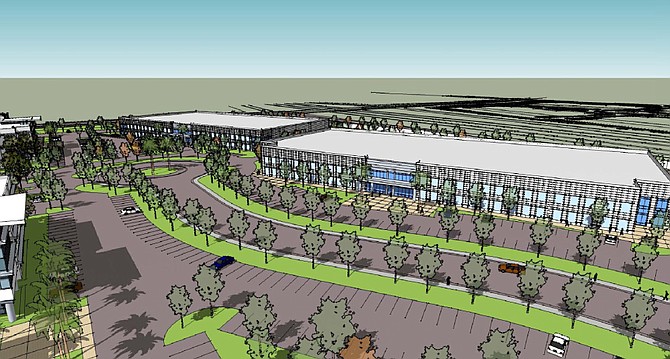 Company officials said entitlements have been secured for a 50-acre development that at full build-out would include up to 3.2 million square feet of space, off state Route 905 at Brittania Boulevard. The project is directly west of Murphy’s existing 155-acre Brown Field Business Park, near Brown Field Airport.

Murphy Development Senior Vice President Kaitlin Murphy said developers have received authorization from the San Diego County Regional Airport Authority, which oversees Brown Field, to put up midrise buildings up to six stories high. However, the multiphase construction at Brown Field Technology Park will not begin until the development has its first build-to-suit tenants signed up, possibly by year’s end.

She said the developer and its brokerage agent, CBRE, have been in discussions with several companies across various industries, and potential tenants include those in sectors such as automaking, technology, health care and food services.

As with its other Otay projects, the developer is marketing selling points such as the availability of larger, build-to-suit spaces at lower per-square-foot costs than in more centralized industrial submarkets to the north, such as Kearny Mesa, Sorrento Mesa and Torrey Pines.

“Space in Otay has recently been available at around 40 to 50 cents a square foot, compared with 75 cents and higher in some of those central and northern markets,” said Murphy, noting that many of the central San Diego industrial neighborhoods are either near full build-out or contain a large inventory of older product.

The family-run development firm, with headquarters at Liberty Station in Point Loma, is led by Murphy’s father, founder and President R. Michael “Mike” Murphy. At a recent ceremony in Otay, marking the completion of work on Route 905 and the start of his firm’s latest project, Mike Murphy said the new highway is a crucial element in plans to make South County more viable for larger number of companies and industries.

Route 905 now links directly to Interstate 805, he noted, and combines with other recent infrastructure improvements — such as border crossing improvements and completion of state Route 125 — to help ease north-south traffic flow. That in turn helps break the stigma of South County being remote and inconvenient for conducting business.

“Otay is now connected to the balance of San Diego,” he said. Murphy also noted that his firm’s industrial projects complement other commercial development in the works in Otay, such as a retail center being planned by locally based Sunroad Enterprises.

Eric A. Brenk, general manager and chief operating officer at specialty food maker Circle Foods, said continued infrastructure upgrades in an improving economy should make the Otay market a feasible location for more types of companies. Circle Foods is currently Otay’s largest employer, with more than 600 workers, and Brenk said sales have doubled since the company moved into a cutting-edge, 159,631-square-foot build-to-suit space at Siempre Viva in 2009.

Local leasing experts note that Otay Mesa’s industrial market has seen a significant postrecession recovery, although it still has room for improvement in terms of overall corporate demand for space.

According to the brokerage firm Colliers International, Otay Mesa’s total industrial vacancy stood at 15.4 percent at the end of the first quarter, and its net space absorption for the quarter was 318,235 square feet, the highest among all of the local submarkets tracked by Colliers.

Otay’s average rental rate during the period was 47 cents per square foot, well below the countywide average of 83 cents.

Shane Harmon, senior vice president in the San Diego office of Colliers, said Otay Mesa has recuperated significantly from the depths of the downturn, when its vacancy rate reached as high as 25 percent. Much of the submarket’s woes were created by pre-recession speculative over-building, which caused landlords to compete for tenants during the downturn by slashing rents.

Harmon said the region has also moved beyond a reliance on Asian electronics makers, which significantly boosted their Otay presence during the 1980s and 1990s for production of items like TV sets. For several years, many of those firms set up “twin plant” operations, with manufacturing facilities south of the border overseen by administrative offices in Otay, but that model has since faded with changes in the global marketplace.

Harmon noted that Murphy and other Otay Mesa developers have recently been able to accommodate large firms in other industries seeking facilities specific to their needs, such as FedEx and Costco Wholesale. The next step, over the next few years, is to develop affordable homes, schools, retail centers and other amenities that would draw more companies seeking to meet the lifestyle needs of their workers.

“They just need some more critical mass down there,” Harmon said of the Otay region.