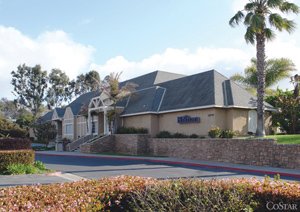 The City of Del Mar is using a relatively new, high-tech method to deal with the old-school issue of loud train noises, which have long irritated residents and property owners in its downtown commercial district.

Del Mar recently launched what is known as a wayside horn system, targeting the blaring noise by trains passing through Coast Boulevard, which runs along an oceanfront park and is also near several restaurants, hotels and shops.

According to the city, the system’s horns are directionally angled speakers fixed at crossings to focus sound toward approaching traffic when a train is passing. The system allows train conductors to avoid sounding multidirectional blasts that can be heard several miles away, although, those horns can still be sounded in dangerous or emergency situations.

“It’s supposed to reduce the decibel levels by around 65 percent, and, so far, it appears to be working,” said Michael Slosser, vice president and managing director of Destination Hotels & Resorts, which operates the 120-room luxury property L’Auberge Del Mar. “I hardly hear any noise coming from that direction anymore — the change is dramatic.”

The system was installed at a cost of approximately $378,000 and paid for by city residents and businesses, according to a city staff report. It is being operated by the North County Transit District, and officials said it could serve as a model for the larger North County region.

Region Books More Hotel Property Deals: They may not be the trophy transactions with gargantuan price tags seen during 2011, but the San Diego region continues to see a steady stream of hotel property acquisitions this year.

Among the latest was Maryland-based Chesapeake Lodging Trust Inc.’s purchase of the 429-room Hyatt Regency Mission Bay Spa and Marina hotel for $62 million. The seller was Kencal Ownership LLC of Seattle, according to CoStar Group.

“With the previous owner’s extensive renovation completed in 2007 and our planned $6 million soft-good refresh, the Hyatt is the best positioned asset within the immediate marketplace,” said Chesapeake President and CEO James L. Francis.

Also in the past two weeks, Sunstone Hotel Investors Inc. continued its strategic sell-off of some local properties, announcing that it is selling the 257-room Hilton Del Mar as part of a larger sale of three U.S. hotels to an undisclosed buyer for a total of $107.1 million.

The Aliso Viejo-based Sunstone also said it has completed the previously announced sale of the 284-room Marriott Del Mar in Carmel Valley for $66 million. The buyer was Thayer Lodging Group of Maryland.

Helm’s is scheduled to open in October in a 3,040-square-foot space, according to a statement from Harsch Investment Properties of Portland, Ore.

Helm’s General Manager Matt Johnson said the concept is to be a “community brewery” where people can gather to enjoy a variety of tasting ales.

That arrival will follow on the heels of San Diego-based Karl Strauss Brewing Co.’s recent opening of its seventh local brewery restaurant. The latest occupies 8,243 square feet at 10448 Reserve Drive, in the 4S Ranch community near Rancho Bernardo.