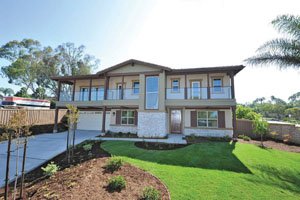 New Pointe Communities Inc., a Rancho Bernardo builder, recently built this 5-bedroom house on Saxony Road in Encinitas, currently listed for sale at $949,000. Adapting to current market conditions, the builder’s strategy is to build one house at a time and has completed eight new houses this year, and is on track to finish 12, at prices that average about $1 million.

As vacant land becomes more difficult to find around San Diego, the trend in new home development has been toward building fewer units at a time, say local developers.

New Pointe Communities Inc., a Rancho Bernardo builder, completed eight new houses this year, and is on track to finish 12, at prices that average about $1 million.

Scot Sandstrom, president of the company, said the days of constructing larger tracts are over.

“The days of having 100 lots and building 10 to 20 houses at a time are behind us,” Sandstrom said. “What you’re seeing today is construction of five to six houses at a time…and you’re trying to do more pre-selling than ever before.”

“We’ve completed eight and will probably end up at 12 this year,” Sandstrom said.

Typical of his company’s work is a recently-completed, 3,000-square-foot house in Encinitas just east of Interstate 5 and south of Encinitas Boulevard, with five bedrooms and three and half baths. The house was just listed at $998,000.

Activity Is Trending Up

Sandstrom said his goal is to sell a house within 30 days of its completion. Except for a couple of higher-priced houses in Rancho Bernardo and Poway, sales have generally been done in that timeframe.

Reports of some larger home builders show activity is definitely trending up this year compared with what occurred in 2011.

At Davidson Communities’ Arista at the Crosby project in Rancho Santa Fe, 21 new homes were sold since the master planned community opened in March, averaging one home per week.

The flexibility in floor plans for the new houses is a key selling point, said Petra Eigl, Arista sales manager.

The plans include living spaces to accommodate either an elderly parent or returning child to the house, Eigl said.

“The flexibility of these floor plans has attracted an interesting mix of empty nesters and young families, who appreciate the opportunity for multiple master bedroom suites upstairs and down,” she said.

Likewise, at Lennar’s Crescent Heights community in the Sky Ranch development in Santee, the major builder is offering new homes it calls Next Gen that include such features as a separate entrance, kitchenette, full bath, and even space for a stacked washer and dryer. The features are clearly aimed at folks who span different generations and occupying the same house.

Most of the new homes being produced in the local area incorporate energy saving features that add to cost but more than pay off in the form of reduced electric bills down the road.

For example, many of the houses New Pointe is building come with solar panels and low-E (emittance) windows that reduce the radiant heat into the house.

The big advantage to building a smaller number of homes is the level of customization that can take place, assuming buyers make a commitment before everything is done.

Because New Pointe is working in such small numbers it never has model homes to show prospective buyers. The best it can do is show them renderings and let buyers visualize what the house could look like about the time the first framing is completed, Sandstrom said.

But in most cases, buyers are looking at homes soon after the drywall work is done, when its floor plans are better defined, he said.

Yet when it comes to what really sells new houses, the biggest factor is often its location, or proximity to employment areas and to top school districts, developers say.