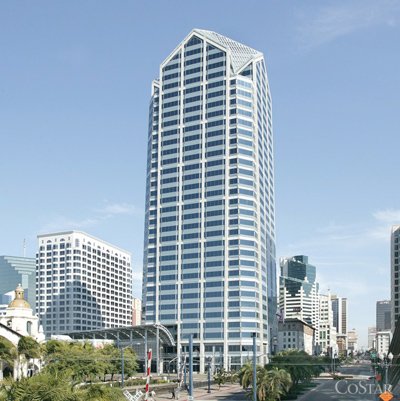 Irvine Co.’s One America Plaza is No. 3 in the San Diego downtown submarket with net operating income of $10.2 million. The largest tenant is McKenna Long & Aldridge LLP with 226,998 square feet.

Irvine Co. not only has the largest office real estate footprint in San Diego County, at more than 7.5 million square feet, but also owns six of the region’s top 20 income-generating high-rises.

The privately held Irvine Co. does not discuss property operating financials. But a recent study done for San Diego Business Journal by The London Group Realty Advisors, covering the region’s four largest office submarkets, found that Irvine Co. owns two of the five best-performing downtown towers based on 2011 net operating income: One America Plaza (No. 3 at $10.2 million) and Wells Fargo Plaza (No. 5 at $8.7 million).

The London Group figures, derived from CoStar Group and other public tax data, also showed Irvine Co. with three of the top five income generators at University Towne Center: Pacifica Tower (No. 1 at $7.7 million), 4225 Executive Square (No. 2 at $5.7 million), and Northern Trust Tower (No. 5 at $4.6 million).

London Group President Gary London noted that Irvine Co.’s recent $52 million purchase of Centerside I, at the same Mission Valley complex as its current holding, could signal future expansion via acquisitions by Irvine Co. in that submarket, as well as other more suburban Class A markets such as Carmel Valley and elsewhere along the Interstate 5 and Interstate 15 corridors.

He said the company during the past several years has followed a consistent strategy to make itself the “gorilla owner” in desired suburban Class A markets of Orange County and San Diego County, and likely is looking to replicate that track record with recent purchases in Silicon Valley.

London said the strategy, spearheaded by Irvine Chairman and CEO Donald Bren, includes a willingness to pay top dollar in prime locations and hold investments for the long term in all of the markets where it operates, predominantly in California. Because of its historically cash-healthy position, it has also been able to afford the building upgrades and competitive incentives required to retain and attract tenants during tough economic periods.

“Anyone who goes up against Irvine is going to have to compete against their strengths, and those include the fact they have the money, and they can afford to be very patient with their investments,” London said.

The company also hosts the region’s two EvoNexus incubators, operated by CommNexus to support early-stage technology companies, in spaces donated rent-free by Irvine Co. at its buildings in UTC and downtown.