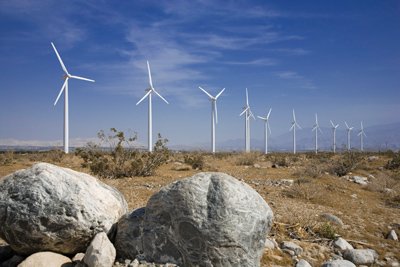 Iberdrola Renewables Inc. could begin construction of a wind farm in San Diego’s East County by next year, now that 67 turbines have been approved for its Tule Wind Power Project.

Proposed for a 725-acre site in McCain Valley, north of Boulevard, the location is one of the few places left in California that have sufficient wind for a utility scale project, said Iberdrola Renewables business developer Harley McDonald. Other considerations for locating a wind project are access to transmission, low environmental impacts, interested landowners and access to customers, she said.

The land is under the jurisdiction of San Diego County, the federal Bureau of Land Management, the Ewiiaapaayp Band of Kumeyaay Indians, the Bureau of Indian Affairs and the California State Lands Commission.

The BLM has approved 62 turbines for the Tule Wind Power Project and recently the San Diego County Board of Supervisors approved an additional five turbines. Combined, the turbines would generate an estimated 134 megawatts of energy, or roughly enough power for 40,000 homes. McDonald said Portland, Ore.-based Iberdrola’s ultimate buildout goal for Tule Wind is 201 megawatts, the equivalent of powering 60,000 homes. McDonald estimates a full-scale project could offset up to 250,000 tons of greenhouse gases per year.

In addition to the 420-foot turbines, the project includes a project substation, an operations and maintenance building, and a five-mile transmission line from the project substation to a Boulevard substation. Although Iberdrola does not have a power purchase agreement in place with any utility yet, the Tule Wind Power Project construction schedule is being timed to coincide with the development of San Diego Gas & Electric Co.’s ECO substation, which is planned to be online in 2014.

More Than $2M Per Megawatt

The American Wind Energy Association estimates it takes $2 million per megawatt to develop a wind farm, according to Iberdrola spokeswoman Jan Johnson, who said Tule Wind is likely to exceed that amount.

“This one’s had a long development process and a thorough and careful one so the costs are a little higher,” said Johnson of the planning that began in 2005.

McDonald added that Iberdrola “fought long and hard” to get the county to approve the turbines and overhead transmission line, which she says are preferential to underground lines as they would be capable of carrying three circuits, allowing other energy projects to share the line. Collocating the line would reduce visual impacts and be less disruptive to cultural resources, she said.

Tule Wind Power Project is also encountering opposition from some area residents and the Boulevard Planning Group. In a July 2011 letter to Patrick Brown of the county’s Department of Planning and Land Use, the Boulevard Planning Group stated Tule Wind “will adversely impact public health and safety; will create significant visual impacts; will not be able to meet new noise restrictions as being revised in a new wind energy ordinance; and will result in loss of property value on contiguous properties, and those properties within sight and sound of Tule Wind, related infrastructure, and other cumulative projects.”

Donna Tisdale, chairwoman of the Boulevard Planning Group, said Tule Wind is a high-cost, low-value and unnecessary project. Tisdale believes that in addition to receiving stimulus funds, Tule Wind would be eligible for the U.S. Department of Energy’s 2.2 cent per kilowatt Renewable Electricity Production Tax Credit, which she says leads to increased energy prices.

Alternatives could include solar projects on rooftops and parking lots as well as other energy efficiency and energy conservation projects, she said.

“They’re gutting our community plan to allow for these types of projects, called civic utility. There’s nothing civic about turbines towering over the homes of seniors, retirees who moved out here for the beauty of the area,” Tisdale said. “It represents a significant nuisance to property owners and the public in general.”

Tisdale said the wind project’s location in the McCain Valley National Cooperative Land and Wildlife Management Area and the McCain Valley Recreation Area represents a loss of public recreation areas and wildlife conservation areas. She also expressed concerns raised by the Boulevard Planning Group about a potential fire hazard, citing in a PowerPoint presentation an Aug. 6 fire at Iberdrola’s Buffalo Ridge Wind project in South Dakota, when lightning hit a turbine blade; an unrelated turbine lightning strike fire in Colorado on Aug. 2; as well as a wind turbine-ignited grass fire in Tehachapi on July 30.

McDonald said Iberdrola has a robust fire mitigation plan that has been praised by the San Diego Rural Fire Protection District. Additionally, Iberdrola will be paying about $1 million in landowner royalty payments, $1 million annually in property taxes to the county, and $30 million in sales and use tax during construction, she said. By way of offsets, McDonald said Iberdrola is paying nearly $4 million to the East County community’s health clinics, campgrounds, tribes, fire agencies and the Mountain Empire Unified School District.

Jason Anderson, vice president of CleanTech San Diego, said CleanTech is supportive of the five wind turbines and above-ground transmission line on county property. He said Tule Wind is an important component of the mix of renewable energy projects that are needed in the region, from solar installations to utility-scale projects.

“We obviously can’t rely on just one of those,” he said. “We realize a mix is necessary for us to meet our renewable energy goals.”