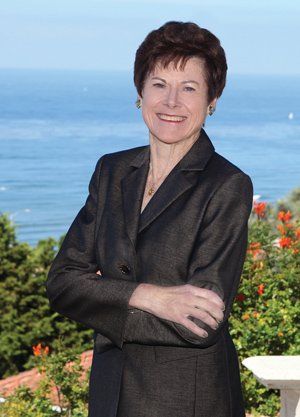 Lynn Reaser was a bit reluctant to make any pronouncements, but, when pressed, said that 2013 should be better than 2012.

Reaser is an economist, one who is in the business of tracking, analyzing and forecasting where the economy is going since the mid-1970s, so you can’t blame her for hedging her bets.

In her new role, Reaser will provide state Controller John Chiang with forecast reports on a statewide and national level, as well as an ongoing analysis of cash flow estimates from state departments and of certain other economic issues such as the impacts of sequestration, the pending defense cutbacks. These reports are intended to give Chiang more information to make better decisions.

Chiang, in his second term, is the cash manager for the state, responsible for ensuring that California has sufficient money to pay its bills.

“This position is a great honor,” Reaser said, and especially important at a time when the state and national economies are still rather uncertain.

Reaser calls herself a market economist, one who puts more faith in the free market process as opposed to more regulated markets.

Asked whether tougher banking regulations now installed following the financial meltdown of 2008 will prevent another global financial crisis, Reaser thinks they will not.

“I doubt any regulations will be sufficient….It’s going to take market discipline. Investors have to be aware of the risks they take,” she said. “I’m skeptical that more regulations and regulators will prevent another financial debacle.”

Reaser has spent most of her career working on behalf of banks. Before taking the job at PLNU, she worked for 10 years as the chief economist for Bank of America, and has worked in a similar capacity for Barnett Banks and First Interstate Bank.

She said that she’s been fortunate in having autonomy in the economic forecasts she’s presented to her employers even if those reports weren’t always upbeat and rosy.

Despite her experience and expertise, Reaser admits she didn’t foresee the depth of this Great Recession or how much damage that the housing bubble and abuses connected to subprime lending would cause.

She preferred to accentuate the positive, saying there are clear signs that the economy is on the rebound, especially on the housing side.

“The headwinds from housing are dissipating and turning into tailwinds,” she said. Demand for housing is definitely increasing, but the problem remains that there is a lack of inventory due to many sellers holding out until property values rise a bit more, she said.

People who know Reaser talk mostly about her smarts, but also give her high marks in translating arcane and esoteric economic data into digestible information that is useful.

“Lynn has one of the sharpest economic minds I’ve ever encountered, but she is also very practical as well as analytical…She can speak at any level,” said Scott Anderson, chief executive at Kingsburg Land Bank, an agricultural lender near Fresno which hired the Fermanian Institute to do some research. “To have someone with this kind of expertise giving us advice, to me it’s invaluable.”

Kelly Cunningham, economist with National University System Institute for Policy Research, said his organization regularly competes on certain projects with Reaser’s group. “I think she’s a tremendous asset for San Diego because she’s a nationally recognized economist and all her accomplishments,” he said. Cunningham noted that both he and Reaser belong to the National Association for Business Economics, made up of 2,300 of the nation’s leading economists in business, academia, and government.

Among some of Reaser’s past affiliations that lend credence to her top-notch reputation are serving as chairman of the American Bankers Association’s Economic Advisory Council; member of the California Governor’s Council of Economic Advisors; member of Leadership Florida; member of The Boston Economic Club; and as an adviser to the cities of Los Angeles and San Francisco.

She earned her bachelor’s, master’s, and a doctorate in economics from the University of California Los Angeles.

Rick Bregman, market president for Bank of America, San Diego, said Reaser was a huge asset to the bank while she served as its chief economist.

“She is so well respected, incredibly intelligent, and has a global following,” Bregman said. Because of her global network, and having access to information from so many different types of sources, Reaser can better detect economic trends that her peers may not, he said.

By Reaser taking a position with the state Comptroller’s Office, she’ll be helping not only the state, but also San Diego, Bregman said.

And while she’s certainly happy to have landed the contract with Chiang’s office (the year-long contract is for a maximum $96,000), Reaser said she’s also focused on continuing to grow the consulting work at the Fermanian Institute, by providing concrete, practical help to businesses and organizations.

“We strive to be an objective source of information for the business and nonprofit sectors. We’re not a think tank or a public policy institute. We’re doing economic analyses that have practical applications.”