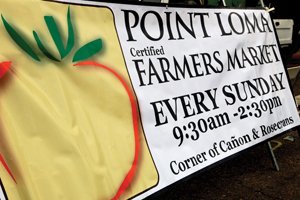 The fruits (and vegetables) of the labors of San Diego County’s more than 6,000 food growers show up daily not only in grocery stores, but at more than 50 farmers markets held year-round in local shopping centers, commercial districts and public spaces.

Now several market managers and vendors have banded together to form what they have dubbed the San Diego Certified Farmers’ Market Coalition, looking to share resources and take on big-box stores and national supermarket chains as the go-to places for locally grown food.

The effort was spearheaded by Brian Beevers, who operates six Brian’s Farmers’ Markets throughout the region. His locations include Westfield Group’s Westfield UTC mall, a strip center in San Diego’s Morena neighborhood, the public Imperial Beach Pier Plaza, and commercial districts in Point Loma, Mission Hills and Golden Hill, each drawing hundreds of shoppers on a different day of the week.

Challenges for farmers’ markets include keeping product offerings consistent across categories, avoiding excessive duplication and getting vendors and market managers to cooperate rather than compete with each other. Beevers says managers can tighten up on noncompliant vendors, who often skip from market to market, sometimes not following correct procedures on issues such as obtaining proper health permits.

He said that he’s enlisted about 30 managers in the coalition, which aims to do for locally grown and produced food what the “Got Milk” campaign did for U.S. dairy farmers, using tools like social media.

“Say my markets are at capacity for vendors serving barbecue; I can post to Facebook that I have a barbecue guy waiting in line and another market can bring him in,” Beevers said. The alternative, which frequently happens now, is market operators believing that rivals have poached their vendors.

According to the San Diego County Farm Bureau, much of the region’s $1.5 billion agriculture industry is fueled by a large contingent of small family farms, with 65 percent of growers harvesting nine acres or less. Their offerings are sold in 54 county-certified farmers markets operating year-round, as well as 22 stand-alone farm stands operating along roadways and on farm properties.

The 189,321-square-foot center is at the intersection of Balboa and Genesee avenues, with anchors including Vons, Kohl’s and CVS Pharmacy. “Balboa Mesa fits Regency’s standards for a dominant shopping center, including infill location, market-leading anchors and population density,” said Howard Overton, vice president of transactions for Regency Centers.

Regency has headquarters in Jacksonville, Fla., and several U.S. regional offices, including one in Solana Beach.

Former City Hall Building Sold: It was built in 1874 and over the years has housed the San Diego Public Library, city government offices and the police department. Today it is known as the longtime home of Jimmy Love’s restaurant and bar in the Gaslamp Quarter.

According to brokerage firm Cushman & Wakefield’s Urban Property Group, which handled the transaction, the historic Old City Hall retail condominium, which underwent extensive renovation in 1995, was recently sold for $2.78 million.

The 8,000-square-foot, four-story building, at 664 Fifth Ave., was purchased by Ivyments LLC. The sellers were NIXI LLC, Thompson/94th LLC and Khyar LLC.