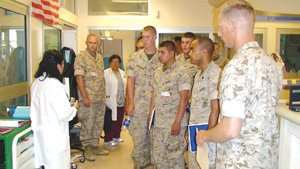 Although it may come as a surprise to some patients, it’s not too unusual to see service members providing medical care at Scripps Health, UC San Diego Medical Center or Sharp HealthCare.

The long and rich history of combining military medicine with civilian practices in San Diego goes back to as long as 50 years, according to the people active in running training programs for the local hospitals. It’s evolved over time because the arrangement involves very little extra costs and offers vast benefits to the participants, they say.

On the front lines of a shared military-civilian care-giving role is Gynecologist Dr. Bruce Kahn, an adjunct associate clinical professor and director of fellows in minimally invasive gynecology. The experienced doctor of 20 years provides training in gynecological surgery for OB/GYN residents at Scripps Clinic. He oversees residents who spend 10 weeks in their third year of training and 10 weeks in their fourth year of training at Scripps hospitals.

As part of his duties Kahn teaches local Navy residents in conjunction with the Uniformed Services University of the Health Sciences Medical School in Bethesda, Md.

While he says the Navy does a great job with its surgical volume and generally younger patient population he can impart knowledge to the military residents about minimally invasive procedures and from a surgical specialty standpoint expose residents to more cutting-edge technology. As one example, he says 80 percent of the women having a hysterectomy at Scripps choose a laparoscopic approach as opposed to surgery. He can also teach military residents skills associated with robotic surgery.

The longtime instructor who says he’s been teaching since he finished medical school can explain why the involvement with military residents is both valuable to the patients and personally rewarding.

“When I have a resident with me I have to be working at a very high level to be their teacher,” Kahn said. “I’m providing the absolute best care I can and that benefits everyone. From my perspective it’s very fulfilling to me because I provide great care for the patients, and I teach the next generation of physicians. Having done it for so many years I would miss it if I didn’t have the ability to teach.”

As an added bonus Kahn says no money is exchanged in the sharing program other than what’s paid to the residents by the Navy. An exchange of residents takes place, though, as the Scripps residents are required to participate in rotations at the Naval Medical Center San Diego.

“We work together as a team so the residents are never on their own taking care of the patients,” he said. “Most of the patients recognize they have a physician as a teacher and it’s a benefit, not a liability.”

At UCSD Health Sciences, Dr. Jay Doucet, associate professor of surgery and director of surgical intensive care unit, says its staff collaborates with the military on clinical and basic research programs, some of which are funded by the Department of Defense. A particular area of focus is on injuries sustained by soldiers in Iraq and Afghanistan.

Among the areas they’re exploring are traumatic brain injuries. Since women generally fare better than men after a brain injury the UCSD researchers are looking into the effects of progesterone, a female hormone that’s typically excreted during pregnancy. Another avenue of study involves MRI equipment to show brain activity and the effects of exposure to a blast, from mild concussions to severe brain injuries. Other research is being conducted using an ultrasound as a noninvasive method of determining if someone is going into shock before there are clinical signs.

Further military-civilian collaboration is done using simulation resources at the Naval Medical Center San Diego and UCSD’s Medical Education-Telemedicine building in La Jolla. The UCSD facility that opened last year is used to teach surgical and other procedures using high-tech equipment such as mannequins with built-in computers that recreate such things as pulses, blood pressure and heart rhythms.

Doucet, a retiree of the Royal Canadian Air Force who spent 22 years in the military and made six tours overseas, says the exposure to the military makes the care-giving experience more dynamic and keeps their work fresh, even to the point of allowing them to find better ways of doing things. What’s personally rewarding is being able to share the scientific and emotional aspects of medicine as it relates to the military.

“It’s exciting to re-establish contact and to give a little something back,” said Doucet. “When I have to look after the wounded warrior it’s a better experience. It’s an honor. One of the most important duties I have after looking after patients is training the next generation.”

Sharp HealthCare has had its own productive working relationship with the military over the years through such activities as a resource sharing program in which civilian mental health professionals have lent their services to Naval Medical Center San Diego and Marine Corps Base Camp Pendleton. Other sharing opportunities have included military psychiatrists and medical staff treating active duty patients at Sharp Mesa Vista Hospital. Sharp has also offered a substance abuse recovery program to the military and exposed military residents to the diagnosis and treatment of eating disorders through an intensive outpatient program.

“They work well with our staff,” Plopper said. “We’ve enjoyed a very collegial, collaborative relationship with them.”