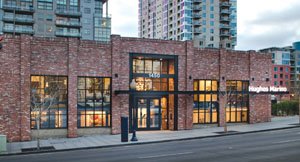 Hughes Marino Inc., a San Diego commercial brokerage firm, opened its new offices on 1450 Front St. in downtown San Diego recently. The building dates back to the 1950s and underwent a complete renovation, inside and out, while care was taken to preserve the building’s historical character.

Leaders of the San Diego commercial brokerage firm Hughes Marino Inc. say they have no regrets about their corporate home improvement project that went way over its original intended budget.

After an investment of more than $5 million, including an extensive makeover of an ailing former industrial building dating back to the 1950s, the company recently opened for business in its new downtown location that, from a design sense, is as much a home as it is an office.

“The goal was to have a place of business, with the feel of someone’s house, but under one roof,” said Shay Hughes, the company’s chief operating officer who ultimately made most of the myriad design decisions that went into the project, ranging from paint colors, to the types of bulbs used in light fixtures, to the art pieces that hang on the walls.

The first floor of the two-story, 12,367-square-foot space sports a large living room and entertainment area with an 80-inch, high-definition TV, and the self-playing piano in the corner has its own built-in Wi-Fi for downloading songs.

There is also a billiards room with a pool table and putting green, a state-of-the-art gym for employees with showers and personalized employee lockers, and a gourmet chef’s kitchen.

The second floor, designed in an atrium format that overlooks the “living room” below, is lined with offices and lighted with multiple skylights. Located throughout both floors are three conference rooms — which the company has made available for community meetings — decked out with graphically-veined marble tables, cutting-edge multimedia technology and plush leather chairs.

The building at 1450 Front St. is the former home to San Diego Magazine, and in an earlier life was an auto mechanic’s garage. But after the renovation there were few reminders in the interior of the site’s past, save for portions of a back wall and a few ceiling trusses.

“This place actually has more living space than office space,” said company CEO Jason Hughes, Shay’s husband. “I don’t think I’ve ever seen an office done up in this way, and I’ve been in the real estate business for more than 25 years.”

After the breakup of the brokerage firm Irving Hughes in early 2011, Jason Hughes went scouting for what would eventually be home for his new firm, which primarily represents office tenants.

Hughes Marino paid $1.8 million for the Front Street property, and in mid-2011 set out to renovate the building for what originally was conceived as a contemporary but relatively standard business space.

Home Away From Home

Over the course of six months — which Jason Hughes said consisted of “many 15-hour work days” — the renovation evolved into the equivalent of a custom residential remodeling project, as he and Shay put more emphasis on making the space a home away from home for employees and visitors.

Completed in December, the reconstruction cost around $2.5 million, with another $1 million spent on furniture, fixtures and equipment. The tab was about double the budget that operators had originally envisioned, but they consider it an investment in the future.

“We originally were going to stay with the concrete floors, but decided they would feel too industrial and went with nice oak floors,” Jason Hughes said. “It would have been easier to not worry about the special countertops or the stainless steel appliances and just go with stuff from Home Depot.”

“But we needed to have something that we want to live with for the next 20 or 30 years,” he said. “We’re not looking to move out anytime soon.”

Working with general contractor Suffolk Roel and the Gensler architecture firm, Hughes said he and his wife made it clear from the start that they wanted to evoke the feel of “old Seattle” — in the vein of what is seen at places like Starbucks Corp. — but also mesh with specific local elements like the nearby Little Italy.

Authentic brick was trucked in to give the exterior a more historically correct look than the aging stucco surfaces that had been applied in prior renovations. “The place really hadn’t been touched since around 1980,” Jason Hughes said.

The quick completion allowed the company to take advantage of a federal tax program allowing businesses to deduct certain depreciation and other expenses related to capital investments, before it expired at the end of the year.

Jason Hughes said the project has also applied for Silver certification under the U.S. Green Building Council’s Leadership in Energy and Environmental Design program, and there will be savings in energy costs over the long run.

After formally opening at the new location in April, Hughes said the firm now has twice the space as it had in its former site, and there is ample room throughout the building to add to its current workforce of 25.

The office design, he said, reflects a desire to connect with the general community, and also send a message about how he wants the company to conduct business.

“Real estate is normally the kind of cutthroat business where the person you most need to watch out for is the guy in the next cubicle over, in your own office,” Hughes said. “We went for a different feel here.”