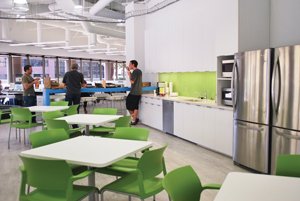 EcoAtm went through the EvoNexus incubator prior to the alliance between CleanTech San Diego and EvoNexus. The alliance is expected to provide valuable help to other clean-tech companies struggling to get started.

A recently formed alliance between CleanTech San Diego and CommNexus San Diego’s incubator, EvoNexus, could be helpful to more clean-technology companies like ecoATM, which previously went through the incubator.

As a graduate of the EvoNexus incubator program for startups, ecoATM now boasts of 50 full-time employees and another 50 in a contracting capacity. It wasn’t that long ago, in November 2009, that the clean-tech venture was being accepted into the EvoNexus program and moved into free office space courtesy of a nine-month lease Cricket Communications Inc. had remaining in a Mira Mesa office building.

Tom Tullie, chairman and CEO of ecoATM, said the free space along with Internet connectivity allowed the team to pull together and focus on the product, which are kiosks that recycle used electronics. Tullie said some of the companies that ecoATM came in contact through EvoNexus invested in ecoATM, and the company was able to raise its first round of capital. Additionally, it collaborated with several companies that had needed expertise, such as Pixon Imaging Inc., which helped ecoATM vet software it planned to purchase.

“It’s extremely helpful. It allowed us to get to production in half the amount of time we would have had we done it on our own,” said Tullie, who describes ecoATM’s success by the numbers — 85 electronics recycling kiosks are installed in California, Seattle, Nebraska, Kansas City and soon to be in Texas followed by East Coast locations. “A lot of people come to me with new company ideas and I always send them that way (to EvoNexus). It just allows you to focus on your business. The fact that they don’t ask for anything else in return is extremely admirable and builds loyalty for companies like us that graduated to support them.”

Partnering with EvoNexus is now only half the story as CleanTech San Diego, a nonprofit that accelerates clean-technology development in the San Diego region, is chiming in to support entrepreneurs in bringing early-stage clean-tech ventures to market.

CleanTech San Diego CEO and President Jim Waring said collaborating with other groups is among the organization’s core principles and values as it benefits its members and communities. Waring said CleanTech works closely with Connect on its Springboard program and event sponsorships and assembles speakers, and has ties to the San Diego Regional Economic Development Corp. when it comes to following up on leads with companies, providing data and reinforcing their efforts.

“I like to think we collaborate with just about everybody,” Waring said. “It’s all about trying to maximize the outcomes in a very competitive world.”

As an example of CleanTech’s collaboration with EvoNexus, Waring said EvoNexus team members could participate in CleanTech’s SCRUB program, a relatively informal setting for newer companies to practice their pitch in front of professionals who are attuned to giving constructive criticism that could help close a deal. EvoNexus could also participate in CleanTech’s showcase programs that invite guest speakers and panelists to share their views on a particular theme or sector.

Waring prefers to think of CleanTech San Diego’s role with EvoNexus as more of a collaborator than a gatekeeper, saying it’s all about being as efficient as possible with everybody’s time and resources. At one time, CleanTech considered starting its own incubator but realized it would be more efficient to dovetail with EvoNexus’ efforts.

“With the success of EvoNexus, rather than spend the resources both human and financial to build our own incubator, we decided why not just work with EvoNexus with their systems in place,” Waring said. “It saves money for the members and saves money for the business community that supports it.”

“We’re honored to have that occur,” Moore said. “We’re thrilled with this faith that they’ve put in us with incubating clean-tech ventures.”

Moore said the collaboration can extend CleanTech’s reach with emerging companies, whose main constituency has been the larger clean-tech organizations such as Kyocera Corp. and Soitec. CommNexus and EvoNexus have always been looking for ways to stimulate the growth of emerging companies, Moore said.

Although Moore declined to identify any clean-tech companies that are currently applying to get into the EvoNexus incubator, he said several are in the due diligence process for admission now. The companies submit an application and go through a vetting process, he said.

“We’ve looked at close to 300 ventures, and we’ve admitted 29 total into the EvoNexus incubator so the bar is very high, but if you get in your chances of success are great,” Moore said.

Companies admitted into the incubator program get the benefit of fully furnished facilities at either a downtown San Diego or University Towne Center location provided gratis by The Irvine Co., bandwidth power, mentoring, access to capital both angel and venture, access to strategic partners, and hands-on involvement from volunteers who are domain experts in the areas of the companies.