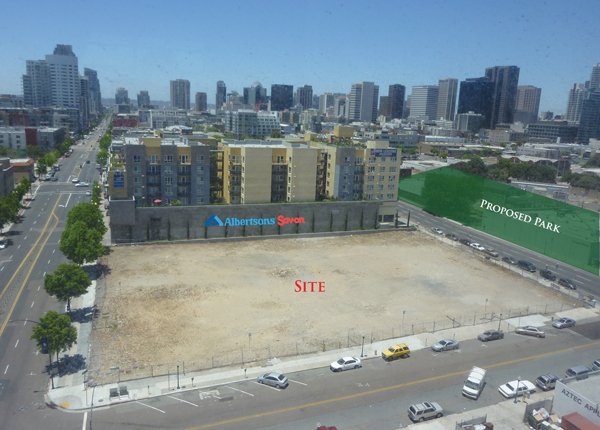 Holland Development, in partnership with Real Estate Capital Partners, has purchased property at the northwest corner of 15th and Market streets in San Diego for $7.25 million. A mixed-use project with approximately 240 apartments over ground-floor retail is planned for the 61,845-square-foot site.

According to CoStar Group, R&V Management Corp., a real estate firm that operates residential units in San Diego County, acquired 316 of the 464 units at the Missions at Rio Vista condominium project at 2242 Gill Village Way in San Diego from Missions Rio Vista LP for $77 million, or approximately $235 per square foot.

CB Richard Ellis announced that Mira Sorrento Venture LLC acquired the Mira Sorrento Business Park with a combined square footage of 97,472, located at 9365, 9370-9380 Waples in San Diego, for $10.5 million. The three-building, multi-tenant industrial/flex project is located in Sorrento Mesa adjacent to Mira Mesa Boulevard and was 100 percent leased at the time of sale.

The seller, Mirso Properties L.P., was represented by Paul Lafrenz, Paul Komadina and Nick Psyllos of CBRE, along with Brian Crepeau and Ken Robak of Pacific Coast Commercial. This was the second sale for the seller handled by CBRE and Pacific Coast Commercial, as they sold the Prospect Park industrial project in Santee in December.

Holland Development, in partnership with Real Estate Capital Partners, has purchased a 61,845-square-foot site located at the northwest corner of 15th and Market streets in San Diego for $7,250,000.

The seller, CJUFII-Lankford 15th & Market LLC, is a partnership of Canyon-Johnson Urban Fund II and San Diego-based Lankford & Associates. The transaction was handled by Victor Krebs and Rob Morgan of Colliers International.

The buyer plans to construct a mixed-use project with approximately 240 apartments over ground-floor retail on the 61,845-square-foot parcel. Construction is expected to commence in the third quarter of 2012. The Holland Partner Group is a multifamily investment company with in-house construction and property management services. Holland has begun eight projects and 1,943 units in 2011, which are being developed through offices in Denver, Portland, Seattle and Southern California.

With the recent sale of The Top of the Mark Penthouse, The Radco Cos. has officially completed the sell-out of The Mark, a 244-unit condominium located in the heart of San Diego’s East Village, directly north of the San Diego Padres’ Petco Park. A local businessman purchased the penthouse, less than one year after the space was placed on the market.

Radco was hired as a lending agent for the project and immediately restructured the property’s loans to include some additional terms and flexibility, with the agreement of all parties involved. Then Radco began a value preservation program, where they stabilized the asset, maintained its value and extracted additional value for the ownership entity.

The Top of the Mark Penthouse features a spacious two-level layout on the 32nd floor of the building, including 3,700 square feet of interior room and more than 1,700 square feet of private terrace and balcony space that offers panoramic views of Coronado Island and Mission Bay. The penthouse also affords privately controlled access and includes four garage parking spaces and private storage.