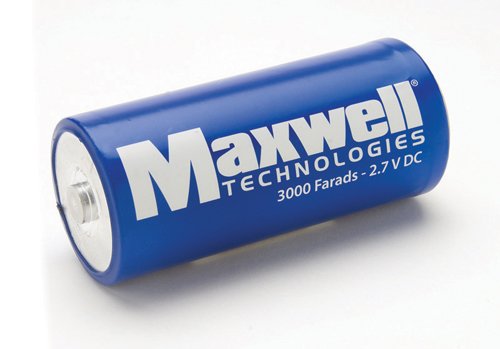 Maxwell said it reached a deal to distribute its engine-start ultracapacitor module for heavy-duty trucks.

The energy-storage business at Maxwell Technologies Inc. continues to drive sales in a big way for the San Diego-based company, with two major deals forged over the past month that will expand its ultracapacitor products further into the transportation industry.

Maxwell recently announced that Germany’s Bombardier Transportation, one of the world’s largest makers of rail transportation equipment, would be using Maxwell’s technology as a core element of Bombardier’s EnerGstor braking energy recuperation system for railway operators. The system reduces rail companies’ reliance on the electric grid.

Shortly after, Maxwell said it reached a deal to distribute its new product — an engine-start ultracapacitor module for heavy-duty trucks — in the United States, Canada and Mexico through a one-year agreement with Pana-Pacific, a Campbell, Calif.-based company that sells equipment to commercial truck dealers.

Through the deal, Maxwell’s new product will be available at nearly 3,000 truck dealerships for well-known brands such as Freightliner, Mack Trucks, and Peterbilt.

“We’re looking for highly profitable verticals for our products, and one of those is engine starts,” said Van Andrews, Maxwell’s senior vice president of sales and marketing. “Buyers are now able to walk into any heavy-duty truck dealership in the U.S., Canada or Mexico and get the engine start module right off the shelf or order it.”

The module will ensure that trucks start up reliably in the morning — an issue for truck drivers who sleep in their cabs, using microwaves, air conditioning and other amenities that can drain down the battery, Andrews said.

The module replaces one of the truck’s four traditional batteries.

Simply put, ultracapacitors are cells that store energy for future use. Unlike a battery, they can charge almost instantaneously and then discharge within fractions of a second to start an engine or provide power independently of other sources, such as a vehicle battery or the electricity grid.

Sund declined to disclose the potential dollar value of its two newly-inked deals with Bombardier and Pana-Pacific. But the company’s recent financial results help to tell the story of how ultracapacitors have become a key business line.

Maxwell began developing ultracapacitors for commercial use in the late 1990s. By 2004, total ultracapacitors sales were at around $5 million for the company, Sund said. By 2010, revenues from that division had grown to $68.5 million of the company’s total $122 million in revenues, as Maxwell found success marketing the technology to wind turbine operators and other industrial clients.

For 2011—a year during which Maxwell landed a contract to provide its technology to China’s biggest bus-maker Zhengzhou Yutong Bus Co. Ltd. — the company expects ultracapacitor sales to hit about $98 million, pushing total revenues to $157 million, Sund said.

In addition to ultracapacitors, Maxwell sells microelectronics for satellites and spacecraft, and has a business line devoted to high-voltage capacitors used in electric utility grids.

Better Than a Battery

As Maxwell continues to look for new markets for its energy-storage technology, it sees potential in data centers and hospitals, Andrews said, both of which need reliable backup power sources.

But for now, the company counts wind turbines and transportation as its biggest markets. Between 2009 and 2010, those two areas helped drive a 56 percent increase in annual ultracapacitor sales, the company said.

Maxwell ultracapacitors are powering more than 5,000 hybrid transit buses worldwide, Andrews said, and are used in several other transportation applications, including a stop-start idle elimination system developed by Continental AG for hybrid diesel cars being produced by PSA Peugeot Citroen in Europe. There are about 300,000 of those cars using the technology today, but “that’s going to reach 1 million very quickly,” Andrews said.