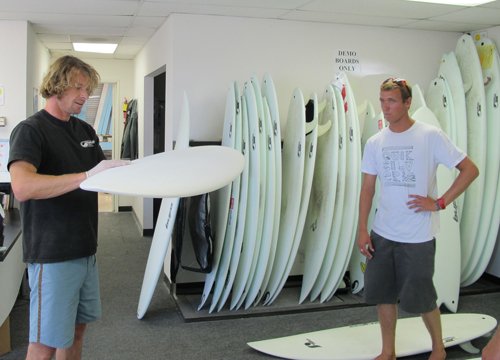 Rouven “Bufo” Brauers examines a surfboard. Brauers’ company Hydroflex is work on ways to improve the technology of surfing.

No. of local employees: Nine.

What makes the company innovative: A three-dimensional glassing process that makes surfboards more flexible and durable.

Rouven “Bufo” Brauers turned to nature for inspiration to come up with a new surfboard.

The founder and owner of Hydroflex Surfboards in Oceanside said he applied the designs evident in plants to create boards that are stronger on the outside yet remain flexible and quicker responding to riders.

“It’s not about the shape, but about the construction,” said Brauers, a 37-year old native of Germany who has been making boards since he was 12.

Carefully observing the plant world, Brauers found plants generally possessed sturdy exteriors and hollow interiors that put a premium on flexibility but are also able to withstand outside pressure.

The problem with most surfboards, Brauers said, is a stringer or wood reinforcement in the middle of the devices that limits flexibility and makes the boards more susceptible to breaking when knocked around in the waves.

Starting a board making business when he was 17, Brauers experimented with all manner of lamination techniques, seeking the right formula to improve a board’s durability and flexibility.

“We probably did about 800 prototypes before we came up with the right design,” he said.

The glassing or lamination process Brauers developed essentially creates a three-dimensional bonding structure rather than a two dimensional one, said Ed Santos, Hydroflex’s director of sales.

“We’ve been perfecting and patented this process over the past two years, and creating more boards this way,” Santos said.

Last year, Hydroflex treated and sold about 750 boards, up from about 300 in 2010, the first year the business began selling in the United States, Brauers said. He declined to give revenue figures. Brauers said he moved to Oceanside in 2007 from Germany to be at the center of the surfing industry.

A surfer since he was 9 years old, Brauers recalled selling his first surfboard when he was 13. Together with his older brother Sven, they formed a board making business in 1991 called Bufo Boards after Rouven’s childhood nickname.

In 1998, he created a prototype for a board he called the Hydroflex, the culmination of years of testing and re-working the lamination techniques.

Unlike most boards laminated on the surface with a glass and epoxy resin mixture, the boards Brauers made injected the materials inside the board. The result makes the boards more water resistant, lighter, but stronger, he said.

In 2005, Brauers innovative glassing technology won a design award, which attracted the attention of Volkswagen AG. The carmaker offered to provide the fledging startup access to its cutting edge engineering site in Wolfsburg, Germany, in return for learning about the various lamination techniques that might be applied to its products.

About four years ago, Brauers developed a new board model intended to give surfers more control. He created an air pressure injection system which allows surfers to pump up the boards or reduce pressure, depending on surf conditions.

Brauers said riders can increase air pressure that provides greater dampening effect for larger wave days. And on days when the surf is smaller, they can reduce air pressure in the boards, resulting in more flexibility and speed, he said.

Hydroflex’s new air pressurized model called the Supercharger isn’t cheap, retailing for about $800, or about $100 to $200 above the price of an average surfboard.

In its two decades, the company has attracted about $1.5 million in investment, including significant sums from a couple of unnamed German backers, Brauers said.

Last month, Hydroflex captured a first place in the action and sports technology category in Connect’s Most Innovate Products Awards for its Supercharger model.

Brauers is hoping this recognition leads to new opportunities to expand the business beyond Oceanside and set up a subsidiary in Australia.

“It’s all about finding investors,”