The 82nd annual Candlelight Ball was held Dec. 3 at The Grand Del Mar. Betty Knight Scripps served as chairman of the evening, which netted more than $2 million to provide lifesaving care at Scripps Memorial Hospital La Jolla. Through Betty’s leadership as general chairman for the past nine years, Candlelight Ball has raised more than $24 million. In recognition of her dedication and community support, the San Diego City Council proclaimed Dec. 3 as “Betty Knight Scripps Day.” She and Ted Killory led the guests to the dance floor as The Bob Hardwick Sound played … Higgs Fletcher & Mack provided a $10,000 scholarship to University of San Diego law student Mellissa Tell for the 2011-2012 academic year. The scholarship was made possible by contributions from 22 of the firm’s attorneys. Tell also receives “Attorney for a Day” where she will shadow members of the firm and attend a 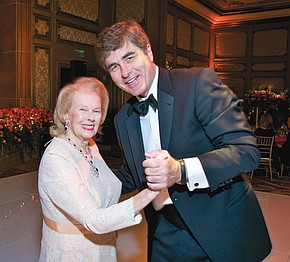 Betty Knight Scripps and Ted Killory led guests to the dance floor at the Candlelight Ball, which raised more than $2 million for care at Scripps Memorial Hospital La Jolla.

reception honoring her and the attorneys who donated … The San Diego Repertory Theatre received a $25,000 grant from the National Endowment for the Arts to be used for the production of the world premiere of “Tortilla Curtain.” … The Seany Foundation hosted teens hospitalized with cancer at the UltraStar Cinemas in Poway to see “The Twilight Saga: Breaking Dawn — Part 1.” The Seany Foundation’s Sponsor-a-Kid program and its supporters provided admission and snacks for the special screening. The event raised $7,000 for research and programs for kids, teens and young adults with rare childhood cancers … Home of Guiding Hands received a $1,000 contribution from the San Diego Unified School District to purchase a new sofa at its Reginas Court house … The Rotary Club of Escondido After 5 presented its first community service contribution since its inception. The club raised $500 to go to Operation America Cares, whose theme is “Supporting Our Troops With Care Packages From Home” … Classics 4 Kids was one of two organizations in San Diego to receive a $10,000 grant from the NEA. The funds will be used to produce Las Tradiciones Musicales Concert Series & Educational Workshops: A Journey Through Mexican Musical Traditions … Bank of America Charitable Foundation granted $100,000 to Reboot, a program provided by the National Veterans Transitions Services Inc. that helps veterans ease back into civilian life after service. “National Veterans Transition Services is an outstanding San Diego-based nonprofit that helps our veterans transition from military to civilian life with careers in new and exciting directions,” said Rick Bregman, Bank of America San Diego market president … HoyleCohen staff, their children and guests volunteered their time to package 10,000 meals Nov. 30. The meals were donated to the organization Stop Hunger Now. HoyleCohen paid for the supplies and Stop Hunger Now brought all the materials necessary to package the meals … The Southeastern Division of the San Diego Police Department and the Jacobs Center for Neighborhood Innovation partnered for the third annual Jerry Griffen Toy Drive on Dec. 15. The party was held at the Joe & Vi Jacobs Center in southeastern San Diego where toys were distributed to underprivileged children in that area. The Jerry Griffen Toy Drive is in memory of a fallen San Diego Police motor officer who was killed in the line of duty … The YMCA Youth & Family Services held its third annual “Angels Among Us” holiday fundraiser at Coles Fine Flooring, raising $40,000 to support the YMCA in strengthening the foundation of our community. The event honored “angels” who have had a positive impact on the lives of participants in the Y’s programs. George Coles and the Coles family hosted the evening.