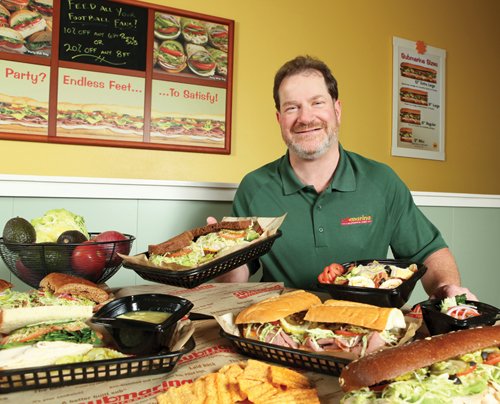 Bruce Rosenthal became the CEO at Submarina in 2010. He is instituting a number of changes including expanding the chain, which currently has 53 restaurants.

Sales: Approximately $17 million in 2010, according to Technomic Inc.

No. of local employees: Approximately 250.

The president and CEO of Submarina Inc. has taken on the complex task of reorganizing and growing the nearly 35-year-old restaurant company, a corporate equivalent of the multilayered process that goes into creating its made-to-order sandwiches.

Taking the reins in mid-2010, Bruce Rosenthal wasted no time replacing a prior executive team, moving to cut administrative overhead at headquarters in San Marcos. Most important, says the longtime investment banker and food connoisseur, was streamlining operations to make them more accountable and responsive to franchisees, whom Submarina California Subs most relies on for success, as it competes against Subway, Quiznos and a host of other sandwich shops.

“Submarina had people with tremendous skill sets and knowledge in the corporate office and great-performing franchisees, but the decisions of prior leadership turned the company upside down,” said Rosenthal, whose experience spans industries ranging from retail to energy and real estate. “In spite of the management missteps, the thing that saved Submarina is that we have a very loyal customer base that loves the quality of our food.”

Changes at the Top

A private equity fund managed by Rosenthal bought most of the assets and the rights to the Submarina name in late 2009. Nine months later, Rosenthal requested the prior CEO’s resignation and assumed operational control, then moved to reinvigorate the company’s area franchise developer network.

That included restructuring the marketing and promotional fund to give proven developers authority and control over local advertising. The company renegotiated its logistics contract and found a new supplier for its restaurants, and Rosenthal used his retail and real estate know-how to help franchisees select locations.

With those elements in place, the company is now looking to expand beyond its current slate of 53 restaurants, including 25 in San Diego County. It plans to open six to eight new eateries in the first quarter of 2012, with more than 20 debuts projected by the end of 2012.

If plans proceed as Rosenthal is projecting, Submarina’s reach would extend well beyond its Southern California home base, and it could have a total of 500 restaurants up and running within five years. In recent months, the company debuted franchised restaurants in Georgia, Ohio, Michigan, New York and Tennessee.

Before the end of 2012, Rosenthal said Submarina will open its first restaurant in Hawaii and its fourth in Guam. Florida and Texas will be key target markets, with the company recently setting a goal of 30 locations for the Lone Star State in the next 30 months.

The competitive and economic landscape is daunting. According to restaurant industry consulting firm Technomic Inc., Submarina competes in a sandwich segment that has grown to more than 30 national and regional chains that posted more than $23 billion in 2010 U.S. sales, up 1.5 percent from the prior year.

Technomic estimates that Submarina had 2010 sales of approximately $17 million, with annual sales holding between $17 million and $19 million during the past three years.

Darren Tristano, an executive vice president with Technomic, said Submarina will be up against not only national chains, but also numerous and long-established independent restaurants serving sandwiches in the markets where it wishes to expand. He said the company will likely look to differentiate itself with an approach that has worked well in California, focused on healthier and lighter fare.

A Taste of Success

“It gets to the point with these chains where you’re looking at saturation,” Tristano said. “They have to offer a different style of sandwich, or a different method of flavoring or preparation.”

Former U.S. Postal Service workers Les Warfield and Ron Vickers started Submarina in 1977, with their first restaurant in Poway. They subsequently turned daily operations over to other investors and managers, although they remain franchisees, and Warfield’s son, Jeff, is now a multi-unit franchisee and area developer for Riverside, Orange and Los Angeles counties.

The privately held company does not disclose finances, but Rosenthal said Submarina is holding its own by focusing on the quality of meats, cheeses and produce in its sandwiches and salads, rather than trying to compete on price with giants like Subway.

In coming months, it will be introducing new salads and dressings, and doing more on-premises baking of its sandwich bread at some locations. There will be experiments with food delivery, and more use of Web and mobile technology that lets customers order items for pickup.

“We’re working within the constraints of a tough economy,” Rosenthal said. “But we are not looking to tread water — we’re looking to grow.”