The Thomas F. Carter Leadership Award was presented to the Frost family at the annual meeting of Rady Children’s Hospital which was held recently at the San Diego Marriott Marquis & Marina. Four generations of the family were represented by Dulie Ahlering, G. T. Frost, Jeanne Frost and Alison Gildred. The family was recognized for its many years of support, volunteerism and advocacy. The recipients of past awards have made exceptional contributions to Children’s Hospital and have given their time, spirit and generosity. The next generation of the Frost family is carrying on that legacy … Friends and supporters of HeadNorth made contributions to the year-end campaign totaling $11,000 to the operating fund of the organization. It was also granted $9,000 to help fund three wheelchairs from Las Patronas 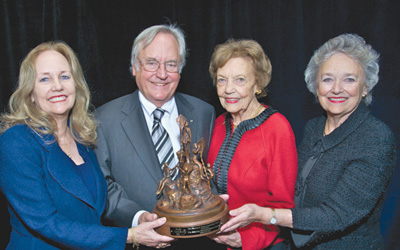 Foundation during the first grant cycle of 2012. HeadNorth will also be receiving the Eagle Spirit Award at Sharp HealthCare’s Victories of Spirit event set for June 1 … The San Diego Armed Services YMCA fifth annual Valentine’s Day Party for families of deployed service members was held at the Reuben H. Fleet Science Center in Balboa Park. In addition to the center, other sponsors included Geico and Charlie King. Families were treated to museum tours, refreshments and tickets to the IMAX movie “Rescue” … The UC San Diego Sulpizio Cardiovascular Center’s 15th Annual Heart of San Diego Gala was held at the Park Hyatt Aviara Resort. Sponsors included Rita and Richard Atkinson, Audrey Geisel, Jerome’s Furniture and Life Technologies … San Diego Food Bank was one of the beneficiaries of Round It Up America, founded by Yard House President and CEO Harald Herrmann along with Vice President Jennifer Weerheim. The funds are raised when restaurant guests “round up” their checks … The Phantom Masquerade Gala to benefit Childhelp was held at the Rancho Bernardo Inn. Sponsors included Southwest Airlines, Del Mar Thoroughbred Club, Alaska Airlines, Diamond Boutique and Rancho Bernardo Inn. Proceeds from the event will go to improve the lives of the children living at the Merv Griffin Village West in Beaumont, as well as supporting the foster care program in San Diego … The Don Diego Fund, a nonprofit scholarship program of the San Diego County Fair, will grant scholarships of $5,000 each to select graduating students in 2012. The scholarships will be awarded in four categories: 4-H member; Future Farmers of America, or FFA, member; employee at the fair, racetrack or fairgrounds; and exhibitor at the fair … The Boys & Girls Clubs of San Dieguito is set to honor Jim Watkins, a local developer, on March 7 at the Del Mar Hilton. Watkins, a supporter for the past 35 years, currently serves on the foundation board of trustees as well as the Chairman’s Council.