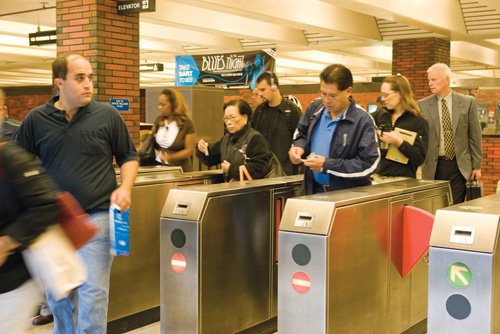 San Diego-based Cubic Corp. is a force to be reckoned with as it makes gains in profitability and staff expansions due in large part to its growing Transportation Systems segment.

For the 2012 first fiscal quarter ending Dec. 31, Cubic reported sales at $318.7 million, a 12 percent increase over the $284.4 million in sales reported in the like quarter of the previous year. Quarterly net income is also up 8 percent to $21.4 million this year compared with $19.9 million in the same quarter last year.

John D. Thomas, vice president of finance and corporate development for Cubic, said the largest increases were made in the Transportation Systems unit, due primarily to major contracts that were won within the last two years.

These include a $370 million contract for the design and development of an electronic ticketing system for the Public Transport Ticketing Corp. in Sydney, Australia, and a $220 million contract to deliver and operate a smart card fare payment and revenue management system for the Vancouver, Canada, transit authority TransLink. Last fall, Cubic was also awarded a $454 million contract for the delivery and operation of the Chicago Transit Authority’s next-generation open payments system that will accept bankcards, and ultimately, mobile phone payments.

Steve Shewmaker, president of Cubic Transportations Systems Inc., said 2011 was the segment’s most successful year, continuing a three-year winning streak of all-time highs in sales, bookings and backlog. Companywide, total backlog, or orders which have been received but haven’t performed work on yet, reached $3.18 billion at the end of the first quarter.

“For the transport industry, this translates to a company that is 100 percent invested in its business of designing and delivering integrated, technologically advanced, open systems for revenue management,” Shewmaker said in an email, while lauding the payoffs from investments in the research and development of new payment and services technologies. “For the transport passenger, our attention focuses on making fare payment simple and intuitive through an informative and consistent style across our systems. It’s all about intelligent travel made real.”

Much of the R&D focuses on expanding the choices that consumers will have in how to pay their transit fares. These include contactless “open payment” by bankcards, near field communication smartphones, 2-D bar coded mobile tickets, Personal Identity Verification cards, and the contactless transit smart cards currently in use.

“Cubic has always been at the forefront of new technology in fare collection, beginning with the most reliable read/read-write magnetics and then to the pioneering of contactless smart technology in the transit space,” Shewmaker said via email.

The growth is leading to staff expansion. In 2011, the number of Cubic Transportations Systems employees increased by 10 percent to 1,600 worldwide, and the trend is expected to continue, according to the company. Shewmaker said the award of contracts during the past fiscal year led to the hiring of engineers in San Diego, Sydney and London. Three new contracts have a 10-year service period and that is requiring Cubic Transportation Systems to hire more than 100 new service-related employees in Sydney, Vancouver and Chicago, he said.

Mari McAvoy, formerly a human resources director in charge of Cubic’s North American HR activities, has recently been named to the newly created position of vice president of Worldwide Human Resources to handle the volume.

In a J.P. Morgan report dated Feb. 3, analysts acknowledged Cubic’s solid first-quarter results above expectations, which were driven by the transportation segment, but maintains its neutral rating as they believe there’s increasing uncertainty in Cubic’s core defense-related business and a lack of catalysts in the transportation business.

“CUB is a leader in both segments and subject to only modest competition in its core markets,” the report states. “While CUB is somewhat immune to macroeconomic impacts, we believe that we are entering a period of no or little growth in Defense Systems and potentially slight declines in Mission Support Services, which is at risk from DoD sequestrations.”