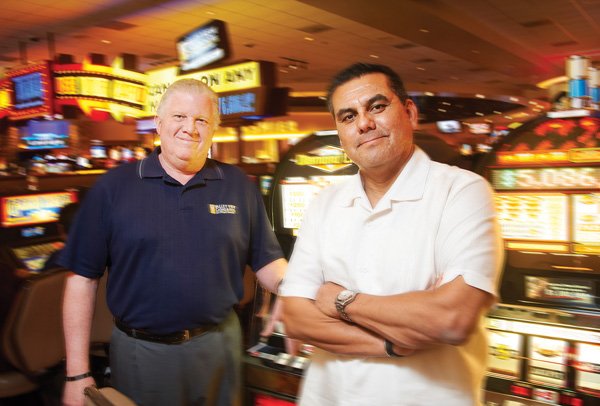 Joe Navarro leads a visitor over the gaming floor of Valley View Casino, past clanging, blinking slot machines, and talks about how crowds move. Three million people flowed through this North San Diego County venue in 2011. Navarro, CEO of the San Pasqual Casino Development Group Inc., which runs the place, is a retired San Diego Police Department officer, and points out details with a policeman’s eye for crowd control and security.

He shows off a million dollars — piled bundles of $100 notes — behind thick glass near the casino’s only entrance. Go ahead, try to move the case, he encourages a visitor. The case does not budge.

More than once he challenges a visitor to find the spots where Valley View added to its buildings as it grew. Seamless transitions seem to be a point of pride for Navarro. The region’s other casinos have put up additions, only to be saddled with floor plans where a visitor can’t move logically.

“Can’t get there from here,” says Navarro.

As a business, Valley View seems to be getting there from here.

The casino and its 1-year-old hotel sit on the San Pasqual reservation, northeast of Escondido and outside the tiny burg of Valley Center. The businesses do not publicly disclose revenue, but their managers say that they have done very well, and have even seen business improve year over year.

Valley View has a reason to hold its financials close to the vest. “Right down the road we have the largest name in gaming on the planet,” Navarro said, referring to Caesars Entertainment Corp., which runs the Harrah’s casino on the neighboring Rincon reservation.

San Diego County has 10 American Indian casinos. “Everybody took a hit in the recession,” Navarro said.

Several things, however, helped Valley View. It was able to increase the volume of people going through the building. “Volume helped,” Navarro said. Valley View was also able to serve its clients with a relatively small staff of 1,000 people who worked very hard, the executive said.

Then there were the slot machines. In 2009, Valley View got past a regulatory roadblock and received permission to install 429 more, to bring its gambling hall up to 2,000 machines. “That helped in the economic downturn,” Navarro said. Valley View also has 26 table games.

One year ago the business opened its 108-room hotel, which lets it draw overnight guests. Valley View is now reaching into the Los Angeles, Orange, Riverside and San Bernardino county markets with print, radio and television advertising.

Bruce Howard, general manager of the casino and hotel, said the business’ core competency is offering value to its customers. Valley View advertising is not complete without mentioning that its slot machines are “certified loose” by an industry magazine.

The venue also touts its food service, particularly its lobster buffet. Valley View buys 600,000 pounds of lobster and 200,000 pounds of crab per year, a spokeswoman said.

The lobster buffet is a “calling card” for Valley View, said Dennis Conrad, president of Raving Consulting Co. of Reno, Nev. “Not many places do what I would call a signature promotion,” Conrad said. The Golden Gate Hotel & Casino in Las Vegas has its shrimp cocktail, he said, while the Ellis Island Casino & Brewery in Las Vegas has its inexpensive steak dinner.

“I’m going to assume they lose money on the lobster buffet,” Conrad said regarding Valley View. “It’s a loss leader.”

Valley View also encourages people to join its Players Club, which allows for joint marketing opportunities and discounts on certain merchants’ products. A colored light system on each slot machine lets floor staff know whether a visitor is playing with a loyalty card. If the light is green, the visitor is a member. If it’s red, the floor staff can talk up the benefits of joining.

Customers tend to come back. Howard said the average customer makes the trip to Valley View 27 times a year. Valley View gets them back by being clean, safe and friendly, Howard said.

It also gets them back by fighting for attention in a crowded field. San Diego County’s casinos are not shy about publicizing themselves. And north of the county line there are casinos that exceed the once-standard limit of 2,000 slot machines.

To spread its name further, Valley View struck a naming rights deal on the 13,500-seat indoor arena in San Diego’s Midway district in the fall of 2010. The deal runs five years with an option to renew. Terms were not disclosed; in 2010, the deal was estimated to be worth at least $1.5 million.

Getting the naming rights “has been fantastic for us,” said Navarro, adding that Valley View Casino Center has “established us with name recognition in the heart of San Diego.” Not only did the deal create a partnership with venue operator AEG, Navarro said it helped the gaming company establish relationships with other sports arena stakeholders, including the City of San Diego and the Hahn family.

More recently, Valley View’s corporate parent got a good piece of business news. The San Pasqual Casino Development Group said it refinanced $215 million in bonds at “an unprecedented low interest rate.” Though specific terms were not released, Navarro said the new financing gives Valley View “flexibility to go in any number of directions.” KeyBank NA and Merrill Lynch & Co. (a subsidiary of Bank of America Corp.) led the financing. Joining them were Compass Bank, Comerica Bank, PNC Bank, Capital One and Manufacturers Bank.

Visions for a Better Future

So what direction is Valley View headed?

Casino executives say they are always planning for more. For example, they are thinking of a bus depot on the casino grounds.

Valley View offers bus transportation for 1,000 people daily. Its buses fan out to areas as far as 150 miles north and 50 miles south of the casino. The business recently struck a deal with Simon Property Group L.P. for exclusive use of six Simon malls in San Diego, Orange and Los Angeles counties as bus terminals. They include Fashion Valley and Carlsbad Premium Outlets.

Valley View might be headed other places, but Navarro and Howard aren’t tipping their hands.

“I have a vision,” Navarro says cryptically. “I have a grand plan. But I don’t know if we’ll be able to carry it out.”