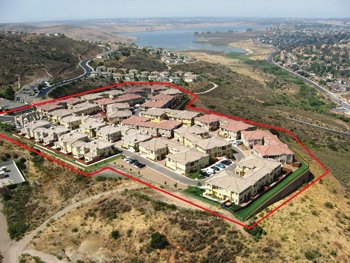 The long battered home-building market has shown signs of life this year in San Diego County, with contracts for future residential construction up 11 percent from a year ago in the first 11 months of the year.

According to data from McGraw-Hill Construction, prospects for local residential building — including single-family and multifamily projects — are actually looking better than those for the commercial side, where contracts for future construction are down 28 percent from 2011. Total future construction contracts were down 17 percent.

Local residential projects now under way include new additions to the recently white-hot apartment market, and building is also under way on small phases — usually 10 or fewer units — of single-family homes throughout the county. One project in Lakeside, however, is a little more ambitious and somewhat unusual for the local market, incorporating elements of a single-family community in what will be primarily rental housing.

Local developer Dan Floit has purchased four residential lots in that East County community, totaling 26.37 acres, for a planned development of 200 single-family homes and attached “twin” homes that will be available exclusively for lease.

The price of the lots, within a development currently known as Settlers Point, was $4.25 million, according to brokerage firm CBRE, which represented the buyer and the seller, Odom Family LP. The site is one block southwest of Los Coches Road near Interstate 8, and Floit plans to rename the project Jackson Ridge.

Floit paid $3.92 million in 2010 for The Pointe Mountain Top, a 15.8-acre gated residential community in Spring Valley, consisting of 24 townhomes and 87 finished lots. He renamed that project Jackson Pointe and developed an additional 87 townhomes.

The owner of San Diego-based Floit Properties Inc., which owns and operates 37 apartment complexes around the county, now plans to follow the Jackson Pointe game plan at Lakeside. Floit said the target residents will be families looking for homelike features, but without the difficulty of qualifying for a mortgage or coming up with a large down-payment.

“Demand for our Jackson Pointe units is steady and competitive, and the community is currently 99 percent leased,” Floit said.

He is aiming to begin construction at Jackson Ridge in August 2013, with completion and move-ins expected by spring 2015.

Year Ends with Big Property Deals: It may or may not be a signal that property owners are looking to get sales completed before taxes on capital gains rise in the new year — one of several matters that were being hashed out at press time in relation to the pending “fiscal cliff.”

Regardless of whether national budget talks played a role, San Diego County saw a slew of big commercial property deals announced in December, before the month was even halfway over.

In the office sector, those included Broadway Lexington LLC’s $135 million purchase of the Columbia Center tower in downtown San Diego; GI Partners’ acquisition of Lightwave Corporate Center in Kearny Mesa for $52.5 million; Lincoln Property Co.’s move, with Angelo, Gordon & Co., to buy the downtown high-rise at 600 B St. for $49 million; and BCL Inc. and AEW Capital Management LLC’s purchase of One Pacific Heights in Sorrento Mesa for $34.1 million.

REIT Shareholders to Vote on Acquisition: Realty Income Corp. recently filed a proxy statement and prospectus with the Securities and Exchange Commission, and also mailed out materials to its shareholders, in anticipation of its proposed and pending acquisition of New York-based American Realty Capital Trust Inc.

The Escondido-based company has scheduled a special meeting of its shareholders for Jan. 16, to vote on the real estate investment trust’ s purchase of American Realty, in a transaction valued at approximately $2.95 billion.

Realty Income officials said shareholders of record as of Dec. 6 will be entitled to vote on the acquisition proposal, which has already been endorsed by the company’s board of directors.

In a letter to shareholders that was part of its public filing, Realty Income CEO Tom Lewis said the acquisition would expand the company’s real estate portfolio by adding 524 properties that are 100 percent occupied, and boost the credit quality of the overall portfolio. Lewis said it would also support the company’s goals for diversifying its holdings beyond the retail industry.

The deal is also subject to approval by American Realty shareholders as well as regulators. Leaders of both companies have said the deal, when it closes in early 2013, would make Realty income the nation’s 18th largest real estate investment trust, based on a total pro forma equity market capitalization of $7.6 billion.