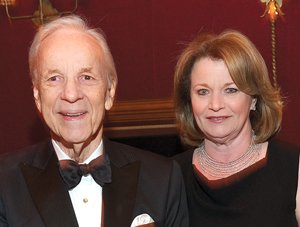 Photo courtesy of Scripps Health Conrad Prebys and Debbie Turner were the title sponsors of the Mercy Ball fundraiser at The Grand Del Mar.

Conrad Prebys and Debbie Turner were the title sponsors of the 42nd annual Mercy Ball held at The Grand Del Mar to benefit breast cancer care programs for the Scripps Cancer Center at Scripps Mercy Hospital. The event raised $200,000. The Scripps Cancer Center is the only hospital-based cancer program serving people who live or work in downtown San Diego, South Bay and surrounding communities. Other sponsors of the event included The Woltman Family as premier sponsor, and supporting sponsors A-1 Self Storage and Union Bank … Another gift from Prebys was a $500,000 pledge to the Boys & Girls Clubs of East County Foundation. His gift will successfully complete a three-year, $2 million Capital Campaign that has repurposed two facilities in El Cajon’s Wells Park into a state-of-the-art Boys & Girls Club and teen center. The two facilities were named the “Conrad Prebys Complex” at a recent reception … San Diego Self Storage matched all financial donations from the 2012 “Bottles for Babies” collection campaign to benefit military families. The campaign collected baby bottles and $5 to $20 donations to purchase baby bottles at 18 SDSS facilities. A total donation of $1,200 will help support the active duty military and their families who are served by the nonprofit MOM4USA … Home Instead Senior Care Foundation presented The Elizabeth Hospice with a $10,000 grant to help provide services to uninsured patients. The foundation’s mission is to improve the quality of life for seniors. The Elizabeth Hospice has a tradition as the premier provider of medical, emotional and spiritual support to the terminally ill and their families … Five UC San Diego students who are former foster youth were chosen to receive state-of-the-art Sony Electronics products. This year, the equipment awarded includes a Sony VAIO E-series laptop, digital recorder, Xperia tablet, PlayStation Vita and Alpha NEX-7 digital camera. With offices nearby in San Diego, Sony began the program as a means to give back to the community. The company was drawn to the research and community service efforts at UC San Diego, as well as the university’s Guardian Scholars Program, which provides resources and support for students who are former foster youth … Sullivan Solar Power is partnering with GRID Alternatives for the holiday season to give low-income families free solar installations. For every property owner that signs up to go solar with Sullivan Solar Power the company will donate one locally-manufactured solar panel to be used for free project installations at low-income residences. As a part of the partnership, Sullivan Solar Power employees will volunteer their time and expertise to assist with the installation of the projects of the donated solar panels. The company expects that two to three low-income homeowners will receive free solar installations as a result of the holiday partnership … Wells Fargo is donating $90,000 to Casa Familiar of San Ysidro through its 2012 Leading The Way Home Program Priority Markets Initiative to help stabilize and revitalize neighborhoods hard-hit by the economy. “These grants are focused on stabilizing and rebuilding local communities,” said Joe Mishriki, Wells Fargo’s area president for the desert border region. “We’re increasing our grant commitments to help even more efforts led by nonprofits to revitalize neighborhoods in cities that have been deeply affected by the challenging economy” … Seven San Diego Harbor Police Department officers, a San Diego police officer and a Navy chief petty officer were honored for their lifesaving actions during three incidents in August and September. They were presented with lifesaving awards and commendations at a San Diego Unified Port District meeting in November.