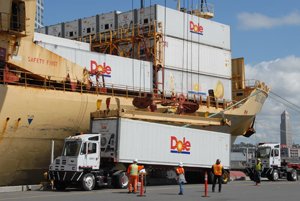 From ship to truck: A crew positions a Dole shipping container to continue its journey over land. Dole’s newly signed lease may keep the company at the Port of San Diego through 2036.

Dole Fresh Fruit Co., one of the largest tenants of the Port of San Diego, officially agreed to stay at the 10th Avenue Marine Terminal for at least 15 more years in a new lease that could be extended to 2036.

Dole, a division of Dole Food Co. with about $6 billion in annual revenue, unofficially agreed to stay here last year, but details of the lease weren’t finalized until this month.

“As an international company, Dole’s continued presence here also underscores the significance of the 10th Avenue Marine Terminal for cargo operations and regional economic vitality including jobs with family-sustaining wages,” said Lou Smith, chairman of the Board of Port Commissioners, which voted unanimously to approve the lease extension.

Dole, which relocated its banana and tropical fruit importing cargo operation here in 2002 from the Port of Los Angeles, had been considering other port sites, including Port Hueneme in Ventura County. With a window for renegotiating the original 20 year lease expiring at the end of this year, the parties began talks on a new lease about a year ago.

To induce Dole to stay and sign a lease extension, the port district reduced its land rent for the site from the $1.9 million that would have started in January to $1.5 million, retroactive to July and continuing through the end of 2017.

Accounting for expected wharfage, docking and other fees Dole’s ships will incur, the estimated annual rent on the 22-acre site is $1.8 million, down from about $2 million it had been paying under the existing lease.

The port commission’s well-telegraphed approval of the lease (it scheduled a signing ceremony after the board’s vote) has been actively opposed by Doug Manchester, the publisher and main owner of the U-T San Diego. The newspaper has run several editorials criticizing the port district for not making better financial use of the prime waterfront, and for not following its own master plan.

In an extensive, front-page editorial piece in January, the U-T advocated for a massive overhaul of the area south of the San Diego Convention Center, including the 10th Avenue Marine Terminal, to accommodate an enclosed football stadium for the San Diego Chargers, along with an expanded convention center, and new sports arena.

The paper said the cargo operations at the 10th Avenue Marine Terminal could be moved to National City’s terminal.

The Chargers have said they aren’t interested in working on a stadium deal at the port site, and remain focused on a site just east of Petco Park that includes a city bus maintenance yard.

Port officials emphasized the 78 jobs that the Dole operation supports, as well as hundreds of truckers that take the bananas from the ships and move them to distribution points throughout the region.