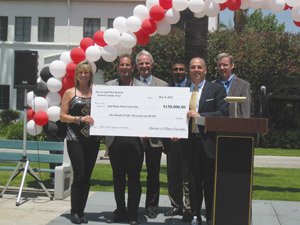 Michael Cunningham, dean of SDSU’s College of Business Administration, received a donation of $150,000 from Professor Steven Osinski and his wife Ellen Osinski for the sales specialization program. The 3M Co. made a $100,000 grant to the program.

There was a time when it was easy enough for Michael Cunningham to apply classroom theory at New York University to his printing business, Cunningham Graphics International. Years later, he’s now in the more challenging position of applying lessons learned in the corporate world to his activities as dean of the College of Business Administration at San Diego State University, a position made much more complicated by the state’s continuing budget woes.

Cunningham said using his final thesis at NYU to take his then company international and eventually taking it public on Nasdaq in 1998 started his real affinity and relationship with universities. After graduating with a master’s degree in 1995 he started teaching courses in quality control and business plan writing at NYU. Then after selling his successful company to Automatic Data Processing he came to San Diego to retire in 2000. While still living in Rancho Santa Fe, he began pursuing his Ph.D. at NYU and simultaneously taught classes in international business strategy and entrepreneurship at SDSU. Upon completing his Ph.D. in 2005, he bought back ADP and continued running it from England with 2,000 employees and 19 factories in six countries.

“Basically we bought that back to turn the business around and wound up selling it to a private equity firm a few years later,” said Cunningham, who returned to the region and is now living in Solana Beach.

‘To Do More With Less’

With dual experience in education and business, he was well-positioned to compete against a hundred other applicants for the role of dean of SDSU’s College of Business after Gail Naughton left the position. The rigorous national search culminated with his appointment in June 2011. His first priority in light of budget cutbacks came as no surprise: restructuring the organization to be as lean and efficient as possible.

“One of the edicts we had to develop was to do more with less,” said Cunningham, adding that the College of Business’s budget was reduced by more than a million and a half dollars in his first year as dean.

“Having done that, it’s important to note that you can’t cut your way to the top,” Cunningham said. “We needed to demonstrate to our investors — our alumni, business partners and taxpayers — that we’re really good stewards of the resources that they give us, and building upon that foundation we can go out and raise more funds for transformational change.”

So along with cost cutting came a renewed focus on investing in the College of Business’ strengths and devising innovative ways of raising funds.

One of the university’s next big goals, for example, is selling the naming rights to the College of Business for $40 million. The university is already getting ready to announce the entrepreneur whose name will appear on the Entrepreneurial Management Center as part of an $8 million naming gift. With funds flowing in, Cunningham said the college can develop programs and support faculty and staff as well as finance such things as student run incubators operated in collaboration with the College of Engineering and College of Sciences.

Other initiatives that are getting a shot in the arm with donations are a Financial Markets Laboratory opening in the campus library Sept. 21 and a sales specialization program that’s expected to launch in fall 2013.

The Financial Markets Laboratory, designed to teach students about financial literacy and financial markets as well as equip them with skills to be successful in the financial services industry, started with a seed gift of $100,000 from Stephen and Marjorie Cushman. The challenge, led by Stephen Cushman, chair of the College of Business Administration board of directors, was to raise additional funds for a world-class laboratory. With a contribution of more than a million dollars from an undisclosed bank, the funds for the laboratory will reach beyond a million and a half dollars by the time it opens.

The sales specialization program is still in its nascent stages but is gaining momentum with a $150,000 donation from SDSU marketing Professor Steven Osinski and his wife Ellen and an additional $100,000 grant from 3M. The program will combine the expertise of the Marketing Department and the Management Information Systems Department to blend the best of data analytics and relationship selling and marketing.

The motivation behind the program stems from Steven Osinski’s experiences at his direct marketing and advertising agency, the The SMART Group, which specialized in working with wireless companies before being sold to Monster.com.

“The average sale in my ad agency was over a million dollars so I always wanted to have the t’s crossed and the i’s dotted and I felt it was important to help others to step up to it,” Osinski said.

The lecturer on selling skills and practices at SDSU said he hopes the sales specialization program will help better prepare students for what is often their first real-world job experience. He added that he’s a believer in the value of sales skills and their ability to help build better relationships and carry over into other aspects of life.

Intertwined with fundraising and a desire to head in new directions, the College of Business raised $15 million during the past 13 months and created eight advisory boards for its departments, centers and institutes with a combined 150 members who consist primarily of alumni and business partners. In addition to their philanthropic endeavors, they mentor students, provide internships and jobs and offer advice on the types of skills and competencies the students need in order to be successful in the workforce.

“One of our biggest assets that we have at the university is our alumni,” Cunningham said. “We are indeed in and of San Diego in that roughly 75 percent of our alumni still live in Southern California.