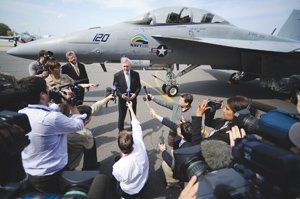 U.S. Navy Secretary Ray Mabus speaks with the media about the supersonic flight of the ‘Green Hornet’ on Earth Day 2010 at a naval base in Maryland. The Green Hornet is an F/A-18 Super Hornet jet that flew using a 50-50 mix of biofuel and jet fuel, and is part of the military’s research into using alternative fuels. Photo by Photo courtesy of U.S. Navy

Common goals for achieving energy independence are uniting the local clean-tech sector and the defense industry.

CleanTech San Diego and the San Diego Military Advisory Council formally launched a strategic collaboration between the two forces during a July 26 meeting at the Port Pavilion on Broadway Pier. Titled, “The Department of the Navy’s Renewable Energy Mandate & How San Diego Will Meet It,” the event drew more than 300 stakeholders along with leaders in the business community, the military and elected officials.

Paul Bollinger, director of business development for Boeing Energy, spoke about applying energy-saving technologies used in the engines and fuselage designs of commercial aircraft to the military aircraft. Bollinger said the military’s surveillance and transport aircraft might be candidates for the proven technology that is mass produced for the commercial airline market and wouldn’t require the heavy upfront design costs associated with a new aircraft.

“Just the Navy itself, with every increase in the price of oil by a dollar, their costs go up $130 million,” Bollinger said. “So that’s why you’re seeing a lot of attention in this area.”

The military’s commitment to renewable energy comes on the heels of a 2010 announcement by U.S. Secretary of the Navy Ray Mabus for 40 percent of the Department of the Navy’s total energy consumption to come from alternative sources by 2020.

Speaking at the recent CleanTech-SDMAC event, Tony Haymet, chairman of CleanTech San Diego and director of the Scripps Institution of Oceanography, said as the Navy moves forward it is committed to increasing national security, including issues with alternative energy and reduction of dependence on petroleum. San Diego businesses and research institutions have an opportunity to demonstrate how their technologies can help the Navy and the nation achieve its energy goals, Haymet said.

One example of the work being done locally is the Scripps Institution of Oceanography’s partnership with UC San Diego and the San Diego Center for Algae Biotechnology. SD-CAB scientists plan to make sustainable algae-based fuel production and carbon dioxide abatement a reality within five to 10 years, according to its website. The goal is creating a facility to provide a national and global model for the commercialization of algae fuel.

“Through San Diego’s biotech and research institutions we have become a leader in developing energy and fuel from solar, algae and other biological sources,” Haymet said. “San Diego is in a great position to support the Navy’s energy objectives.”

While also speaking at the CleanTech-SDMAC event, Smith said the Navy is striving for energy sustainability, efficiency and security.

Strategy is to Remain the Pre-Eminent Maritime Power

“Part of the Department of the Navy’s strategy is centered on the ability to meet environmental stewardship responsibilities across the ranges and bases where we train to fight, reduce the resources we consume and reduce our military vulnerability with respect to reliance on foreign oil,” Smith said. “Said another way, we’re advancing our energy sustainability, efficiency and security while remaining the pre-eminent maritime power.”

Smith said some of the initiatives to support the Secretary of the Navy’s goals have included incorporating energy-efficient features in vehicles and the more than 11,000 buildings in the Southwest installation, installing eight megawatts of solar panels across the region, and completing a 13.8 megawatt solar project at Naval Air Weapons Station China Lake, which will be operated by a private developer when it comes online in September.

“The Navy will purchase power at a better price than what we were currently paying for the next 20 years,” Smith said. “Together these various efforts provide greater energy security.”

“This cluster group of a handful of companies about four years ago is now over 800 companies,” said Sanders in speaking of San Diego’s growing clean-tech cluster.

Capt. Cliff Maurer, commanding officer of Naval Facilities, said there is a lot of work ahead for the Navy Region Southwest and its partners as it shifts its focus from conserving energy to implementing more technical solutions.

The convergence of the clean-tech sector and the military has implications for job creation and economic activity.

According to a June San Diego Military Economic Impact Study commissioned by the San Diego Military Advisory Council, defense-related activities and spending will generate $32 billion of gross regional product for San Diego County in fiscal year 2012. The military sector is also responsible for 311,000 of the regional’s total jobs in 2012.