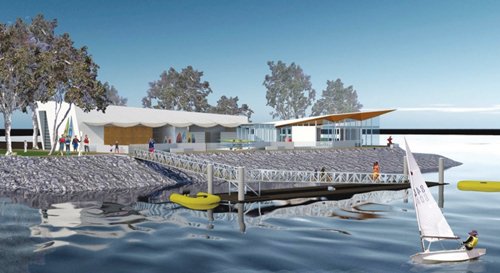 Port officials recently approved plans for a new aquatic center in National City and redevelopment of the Coronado Yacht Club.

Significant waterfront development projects are moving forward in National City and Coronado, after getting the green light from the Port of San Diego.

The Board of Port Commissioners on Sept. 13 approved a plan to fund a new $4.1 million bay front aquatic center in National City, offering activities including kayaking, rowing and environmental education courses. The 4,700-square-foot center will be built in Pepper Park, near Pier 32 Marina, and will replace an existing aquatic center that has been housed in trailers.

Commissioners approved an agreement between the port district and the City of National City, in which the city will contribute $3.3 million and the port will kick in $830,000 for construction. Port board Chairman Scott Peters said after the vote that the center will be a key amenity to attract residents and visitors to the South Bay.

As part of the design by Safdie Rabines Architects of San Diego, the facility will resemble a kite from the air, and feature environmentally friendly building components. Project Professionals Corp. of San Diego is the project manager, and port officials said construction bidding will take place this fall, with completion set for spring 2013.

The project will include public art, landscaping improvements, paved areas for outside activities, security walls and fencing. There will be a promenade and walkways around the aquatic facility.

Elsewhere on the waterfront, port officials also approved a long-planned redevelopment of Coronado Yacht Club, on Strand Way in Coronado. The cost has not been announced, but that project entails building a new clubhouse, adding 108 new boat slips and expanding parking.

It will mean the demolition of the club’s existing buildings. There will be a larger sailing facility to house the club’s growing youth sailing instruction programs, along with a new maintenance shop and multipurpose building.

Port officials said the club’s project next goes before the State Lands Commission in December, followed by an expected California Coastal Commission review in February 2012.

Grand Hyatt Joins Renovation Parade: If there were a TV show called “Extreme Makeover: Hotel Edition,” its local cast would continually be growing.

The new owner of the Manchester Grand Hyatt, San Diego’s largest hotel, is planning an extensive renovation of the 1,625-room property.

A Sept. 9 statement from Maryland-based Host Hotels & Resorts Inc., which acquired the property in March through a subsidiary for $570 million, did not disclose a financial figure for the renovation but said it would involve guest rooms, meeting facilities, lounges, restaurants and public space.

A designer is currently being selected, with work tentatively scheduled to begin in spring 2012, the statement said. A hotel spokesman said no additional details were being released at this time.

This will be the latest in a long series of recent rejuvenations at some of the region’s highest-profile hospitality properties. For instance, one of the Grand Hyatt’s big downtown neighbors, the San Diego Marriott Marquis & Marina, is about halfway through a five-year, $200 million makeover.

Office Bargains Sometimes Tough to Find: If you’re looking for office space and you’re on a tight budget, you will want to steer clear of Sand Hill Road in Menlo Park, home to numerous tech industry venture capitalists.

According to a national study of 40 U.S. office markets, by the brokerage firm Jones Lang LaSalle, that is the most expensive street for office space — at nearly $114 per square foot on average, higher even than Manhattan’s Fifth Avenue (second-highest-priced at $97) and Washington, D.C.’s Pennsylvania Avenue (fifth-highest at $80).

The highest-price San Diego County street on the list was El Camino Real in San Diego, coming in at number 16 nationally with an average rent of $39.72 per square foot, well above the local metro area’s average of $25.80 as of the second quarter of 2011.

El Camino Real is in the Del Mar Heights submarket, east of Interstate 5. Eli Gilbert, a senior research analyst in JLL’s San Diego office, said that street saw rents in excess of $48 at the market’s peak in 2007.